If you air condition it, they will come. 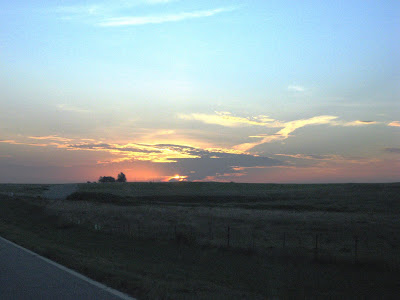 As the sun rose majestically on the prairie, I started the day having no idea if the continuation of our heat wave would have an influence on Route 66 travelers. My concerns were unfounded. It turned out to be quite the mob scene on this last day of July at Afton Station on Route 66. Tattoo Man was there most of the time, Crazy Legs Walker was there for a while too, but both had left before the big "final hour" influx of travelers arrived. By the time the day was over, I'd greeted 42 visitors, 2 dogs, and a horse. (Well, ok, I didn't really "greet" the horse. He stopped for a moment in front of the Station, but then moved on. I was only able to snap this quick photo.) 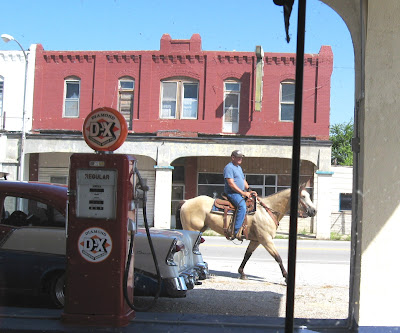 Here's Chris from Westfield, MA, who is traveling with three teen age boys in a pop-top trailer. (The boys are Colin, Conor, and Pedro). They've been traveling Route 66 for a full month and we've been keeping up with their adventures via the Route 66 Yahoo group. Very nice people who seem to be having a great time. In this picture, they're gazing in awe at Ron Jones' tattoos. 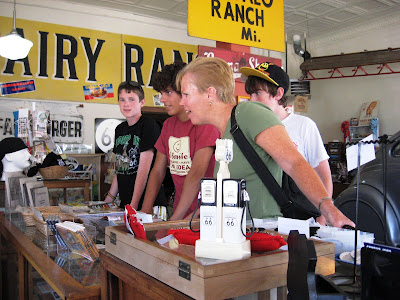 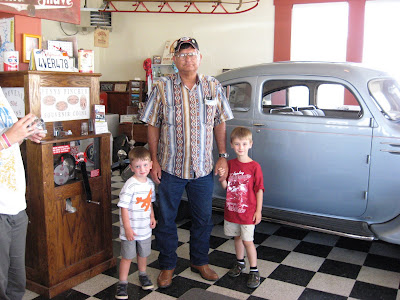 Our two canine visitors may not have been the largest dogs we've ever hosted, but they were (according to their owners) at least the mightiest.
Here's Paco, from Treasure Island, FL, described by his master as "the world's smallest pit bull". LOL! 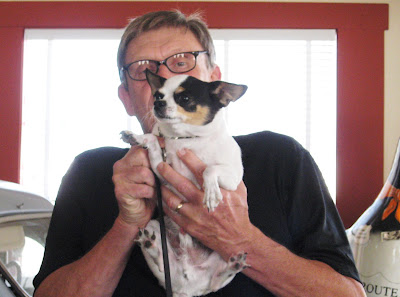 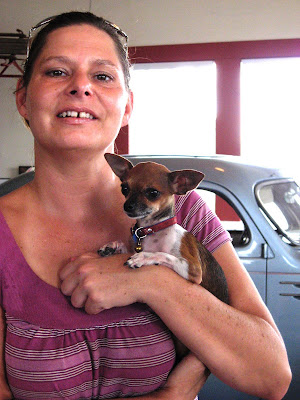 Most of the visitors came toward the end of the day, so I got home late. I'm tired and badly in need of a shower and a bite to eat. But first I wanted to welcome any new readers who may have been guided here by Ron McCoy's fine "Collecting Buzz" newsletter this month. And if you're not on the list to get this free monthly e-newsletter, you may do so by clicking: http://collectingbuzz.com/
That's all, folks!

Glad you had a great day at the station.

I am glad came across your blog. Hubby and I have always wanted to do a Route 66 trip to kind of go backwards in time. Talking to people like you are what I enjoy about a trip. Good health, long life and I'll be reading your blog. Thanks.

I found this site and we so want to take a Route 66 cruise trip. It would be so awesome and you are right the biggest attraction would be meeting and talking to people like you! I love talkin to unique real people.

I'm so glad you read my blog and that you're eager to take a Route 66 trip. You'll love it! I hope you'll come to visit us when you make the decision to take to the road.

It's must be unusual for people there to see air conditioning systems, even in cars. Your experience is one of the greatest stories I've ever read. What was it like staying there? Btw, you really have cute li'l dogs!!! :D

An air conditioner is an appliance to change the air temperature and humidity within an area typically using a refrigeration cycle but sometimes using evaporation, commonly for comfort cooling in buildings. Our Furnace Filters business helps to keep the maximum air flow through out the house and Reduces the cost of energy you use. I hope you like it.

Air conditioning is the removal of heat from indoor air for thermal comfort. It Protect the indoor air pollution levels can be 100 times higher than the air outdoors. Our Air cleaner business is one of the good service provider.

Thanks for sharing, it really prove worthwhile for my Plumber London business. It is a perfect solution for home repair services.

At Acumen Heating and Air Conditioning Baltimore. we develop custom programs tailored to your business needs. Whether you have a single building or a series of buildings, Around The Clock AC & Heating has the experience and flexibility to meet all of your preventative maintenance needs.

Air Conditioning is a good solution for polluted free environment, and our Ac Repair Phoenix certified technicians will repair your air conditioner and get your AC running as quickly as possible.

Air conditioning systems allow you to enjoy your perfect indoor temperature in any of the rooms within your home. It kept cool and comfortable throughout the warmest of summer nights. This blog is really workout for my Indoor Air Quality business.

Air conditioning system decreases the humidity in the air and maintains the quality of air. It usually consists of a condenser, evaporator, and a compressor component. Our Air Conditioning Katy is doing good job in the field of Air Conditioner.

Our one of my AC Service, Humble business, we are able to find and fix problems the first time and ensure that our new systems are properly sized to provide maximum comfort for your family.

When your HVAC system breaks down call our Evanston Heating & Air Conditioning services. We are all licensed, bonded and insured and available to assist you whenever you need us.

When the AC filter is dirty, the cooling coil becomes a frozen block of ice. This will restrict the amount of airflow that is coming through your home. Just replace your air filters to avoid this issue. Our Skokie Heating & Air Conditioning  will provide quality services.

Our work out the best possible heating and cooling options for their home and lifestyle. So, whether you are looking for the most affordable furnace or evaluating a heat pump for your home or business,Our Air Conditioning Repair Portland is one of the best service provider.

When it comes time to search for an HVAC technician. Our one of my ac repair 77401business provides good job in the field of HVAC.

Thanks for sharing with us.This provide more effective information to all. Air Conditioning North Houston

I'm so glad you read my blog and that you're eager to take a Route 66 trip. You'll love it! I hope you'll come to visit us when you make the decision to take to the road.

I am very thankful to all your team for sharing such inspirational information. It really helpful for us. Thanks a lot! Good work, keep posting. Heating Repair Lakeview

Interesting post and thanks for sharing. Some things in here I have not thought about before.Thanks for making such a cool post. AC Repair Miami Lakes

Thank you so much for taking the time to share such a nice information. Air purification New Orleans

There are many different ways to cut the costs of air conditioner repair, and a lot really depends on how much you can do yourself, and the type of unit you have. It also depends on how much money you are willing to spend in preventative measures. There are several different options when it comes to cutting down on these costs.

It would be so awesome and you are right the biggest attraction would be meeting and talking to people like you!
Air Conditioning for Home Richardson

Passport to Be YOU TY said...