The Calm Before The Storm

For most of the morning, Betty B., Tattoo Man, and I wondered if the extreme heat wave was going to make this my first day without a single visitor. We waited, Betty B. rearranged her shelves, Betty W. stopped in for a visit, and Marly and crew sweated over their manual labor out back. Would this really be the first summer day ever without any passing travelers? Bt 1 p.m. that started to seem possible. I was NOT happy.

Then, Betty W. and Betty L. left. With that, Tattoo and I were deluged with an onslaught of visitors -- 26 in about 90 minutes! NOW it was becoming fun! They came from Hulbert OK, Shigayoka Japan, New Hope PA, London England, San Francisco CA, Bella Vista AR, Cedar City UT, Cottontown TN, and Orlean and Toulouse France.

These local kids came in to chat for a while. Very cute. When I asked them to pose for a picture, this is as close as they'd get to one other. "She's not my girlfriend", he said. Ah, those crazy 'tweens! 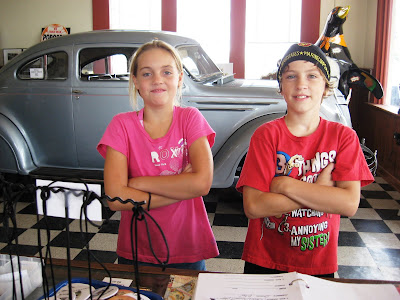 Pete and his son Jason Guy from Utah were here just a few days ago, but came back for a second look. Both wanted to be photographed with the renowned Tattoo Man. Here's Pete. 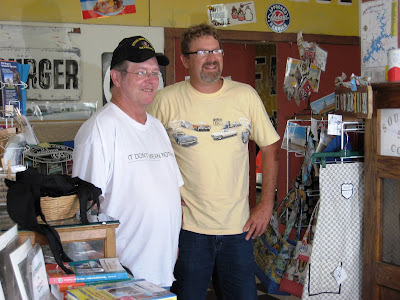 And here's Jason, the son. Look closely and you'll see that Tattoo Man hasn't quite grown up yet. 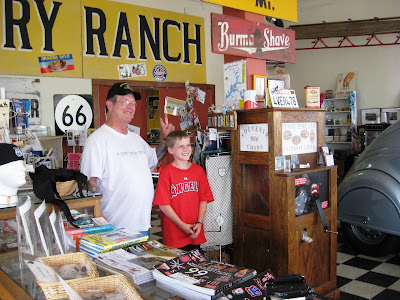 This was impressive -- an extended family of 11 from Orlean and Toulouse, France, all traveling together in a caravan of three cars. They plan to traverse all of Route 66 from Chicago to L.A. 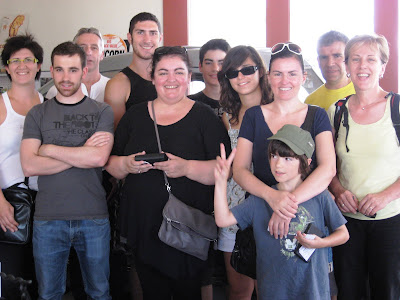 While we were having all the fun indoors in the air conditioning, Marly and crew were slaving over the puzzle of putting together a modular metal building in the 100+ degree temperatures outdoors. Of course, I urged them to come in for cooling off and a cooling drink as often as possible, but they braved most of the day sweating in the back yard. 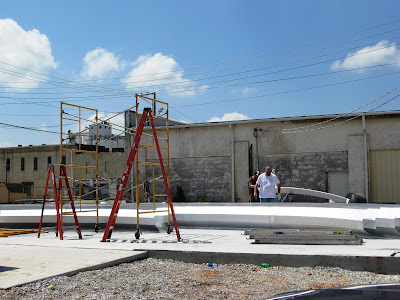 Here's Marly's brother Ryan displaying his muscles. Or maybe those are "thumbs down" for the day. 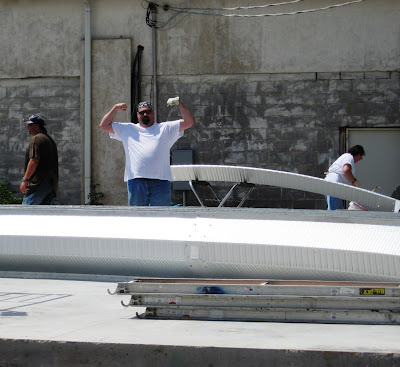