A group of eye-catching Plymouth Prowlers definitely added a splash of color to our day at Afton Station. The group, led by Larry Lord and made up of folks from Oklahoma, Arizona, Washington, California, and Texas are prowling around Route 66 for the second summer in a row. There were 9 cars and 12 people in the group, and what a congenial bunch they were! Betty B. was helping me out today so she got to see the cool cars, too. Here are some of them. (My camera was behaving badly in the blinding sun today, so excuse the quality of photos.) 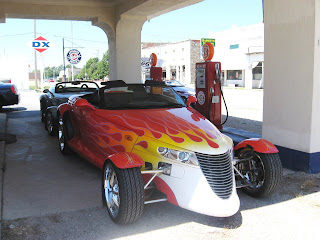 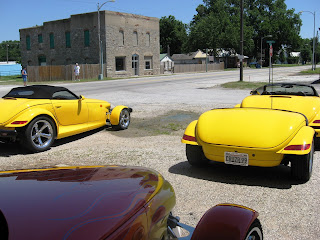 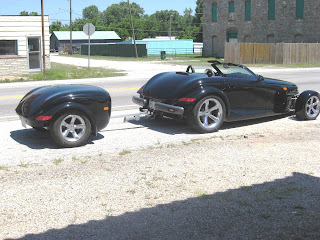 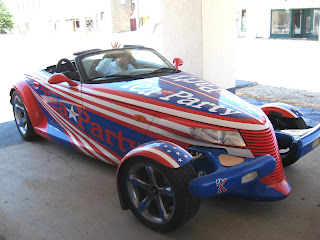 I'm pretty sure this guy is into the Tea Party movement. :-)

The group will be coming back next Tuesday on their way home. I'll be very pleased to see this fun crowd again.
Betty W. came for a visit and brought me some of that awesome Amish butter. And her friend Reuben came in bearing 18 ears of the MOST delicious corn freshly picked from his garden. (I just ate two ears and declare them AMAZING! Nothing like corn just off the stalk!)
Also visiting today was Shelby Rigg, the founder and power behind the new group forming for younger people who are interested in Route 66, and her two friends stopped by. Shelby is the daughter of one of the 4 Women On The Route in Galena, KS. They were heading for Arcadia for an event to be held there tonight. 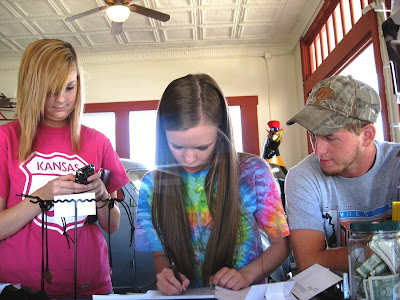 Shelby is in the center

Three Kiwi guys from New Zealand on a THREE MONTH Route 66 trip (I'm jealous!) arrived in a neat 50s-era Cadillac they bought in Florida just for the trip. At the same time, a gentleman from Kingston, Ontario Canada drove up on his very loaded Suzuki V Strom motorcycle. The fellow from Canada was taken with the '50 Studebaker, since his father had one exactly like it, right down to the body color. 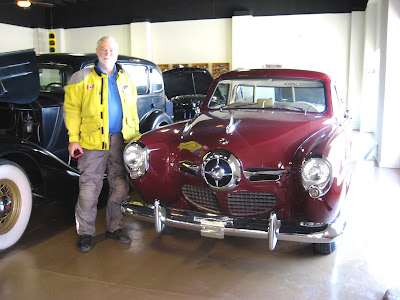 A very attractive young couple from Norway visited, as did two truckers from Arkansas, a couple from Adrian MI, and a guy from Miami, OK. Friend Jon Edwards from Tahlequah, OK stopped in again, for the fourth time in two weeks. I think he's definitely hooked on Route 66!

Whew... quite a day! Thanks to Betty B. for pitching in during the busy times.
Posted by Laurel at 5:48 PM