With the thermometer hovering on the 100-degree mark and the heat index at 108, it wasn't a day for anybody to want to do much of anything. Our most intrepid Route 66 travelers at Afton Station were a couple from Fairboult, Minnesota, traveling with the top down on their red Corvette. Wow.... too hot for that, in my humble opinion, especially if you're from Minnesota where cooler temperatures are the general rule. However, these folks were having fun on their way to the Grand Canyon, and they should have great tans by the time they get there.

Another intrepid traveler was a woman from Lansing, Michigan doing the whole Route, start to finish, by herself. She indicated that she loves traveling solo, and I concur. I'm sure she'll have a ball, since she's done part of Route 66 previously, and had all the right guidebooks.
A lovely man named Roger, who runs the local "Meals on Wheels"-type non-profit in the Ottawa and Craig County area came in just to look around. We talked quite a bit about the rewarding feeling of delivering daily food (and conversation!) to shut-ins. What an important job Roger is doing!
Toward the end of the day, we were visited by ten old friends who went to school together years ago in Barnsdall, Oklahoma, traveling together in a caravan, were doing a day trip up on our end of Route 66. They now live in Tulsa, Bartlesville, and Skiatook, OK.
Work on the new building progresses even in the heat. I just need to give a shout-out to those three guys who are sweating it out every day, cutting themselves on sharp edges, and clearly wishing they had several more people on the job in order to lift those giant pieces of sheet metal. Marly is proving himself to be a great manager of a very difficult project. 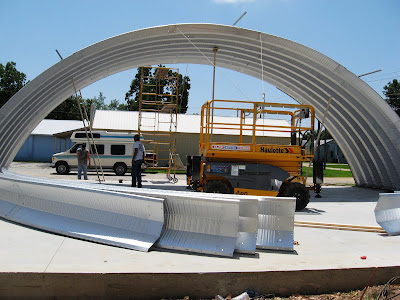 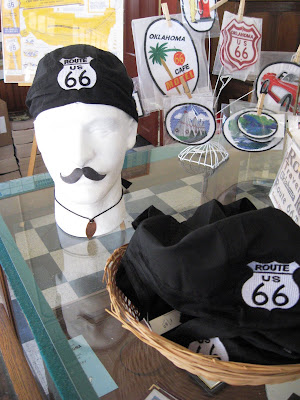 Amid the heat, here's something cool. Betty B. makes these very cool signs out of cut up license plates. Aren't they great? She has several other designs, and she also has the blisters to prove it! 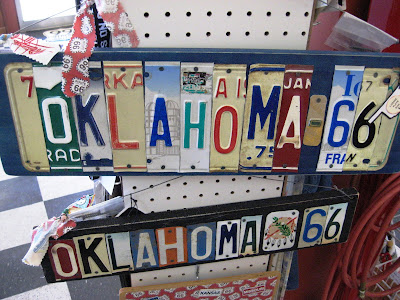