I hate to weigh the fun of having one magnificently busy day after another at Afton Station with the weariness I feel when I get home from such a day. But seriously, I'm tired! I'm not tired while I'm there meeting all the interesting people who pass by during their Route 66 vacations, but when I get home (late again today) my poor fingers can barely type out this blog. However, I shall carry on, since it's a commitment I would never think of shirking. (Well, maybe sometimes..... LOL). I love my readers!

Today there were 38 visitors, and once again they were all interesting. If I had the time tonight, I'd describe each and every one of them in detail. But instead I'll just give a brief rundown:
These folks from Baton Rouge, LA started our day. They're a very interesting couple, well versed on Route 66. He's a worker on an offshore oil rig (Shell Oil) in the Gulf, and was kind enough to tell us in some detail what it's like to work on a rig. She's a school psychologist. Ron and I really enjoyed these folks. 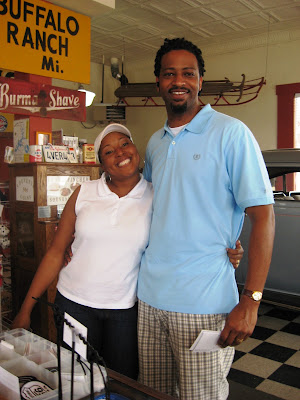 A Japanese traveler from Osaka wrote in the guest book in English until I asked him to leave his comment in kanji. Now, I want to know what it says! Even my two years living in Japan haven't given me the ability to read it. Can anyone help? 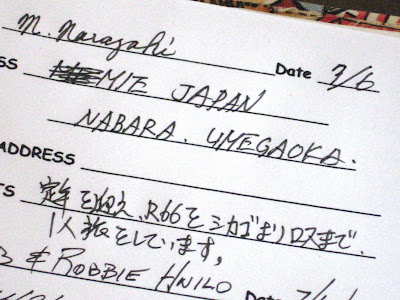 A group of six Corvettes and 12 Corvette owners surprised us by stopping for a visit. They were from the Fox Valley (Batavia, IL) Corvette Club and were heading for Santa Fe. While they were perusing the Station, the heavens opened up and there was the danger of a good drenching. Ron M. took this photo just before the deluge. 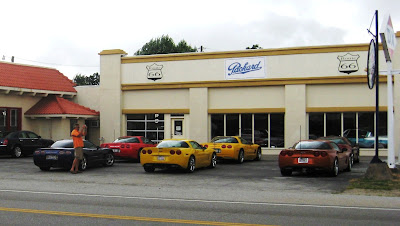 The Corvette Club visit made up for the non-appearance of the Prowler Club that never did show up today as planned. I feel sure it had something to do with the driving rain we had all afternoon. You know how those little convertibles can be! I'll bet they holed up somewhere under cover, so they're certainly forgiven although it would have been very nice to see them again.

We also had a visit from Sanjay Patel who owns the little Afton Route 66 Motel down the road across from Buffalo Ranch. He finally had a little time for a long-anticipated visit to Afton Station. I never have any qualms about recommending his fine establishment to our visitors. The motel is old and not quite perfect, but it's clean, reasonable, and they have some crazy theme rooms!

I have some more photos, but I'll post those tomorrow. Night!

Translation from kanji to English: This is my absolute favorite stop on Route 66. You have the most comprehensive display of Route 66 memorabilia I've ever seen and the unique antique cars are incredible. You are the most beautiful and friendliest person I've met on the Route. Thank you very much for making my day complete. Kiss-kiss.

From my limited knowledge of Kanji, I believe you've probably got it mostly correct, but I think I see a line you forgot... something about the handsome white-haired guy next to me eating cheese curds. :-)