At Afton Station, we do a lot of talking about how much the town of Afton could use a parade. We may be short on floats, big balloons, marching bands and people, but we're convinced we could put on an eclectic parade that would reflect the spirit of the town. Our vintage cars would be used of course, and they could be accompanied by kids on bicycles, kids on their dads' John Deere tractors, Fork Lift Man with his fleet of three forklifts, the guy on the golf cart with the dog that rides with him, assorted folks from the mental health clinic behind the Station, and for music I'd be happy to play my kazoo. Oh, and we would have to include the three-legged dog, of course. It might be a rag-tag procession, but it would be our very own parade.

But alas, another Fourth of July was threatening to pass without any kind of parade at all. So, taking the matter into my own hands, today I declared Ron M. the "Grand Marshal of the 2010 Afton Fourth of July Parade". He was thrilled! He was so thrilled, in fact, that he put on his Uncle Sam hat, padded his tummy with a pillow, and .... god help us.... put in his fake teeth left over from Halloween. (This may be the creepiest picture I've ever posted!) 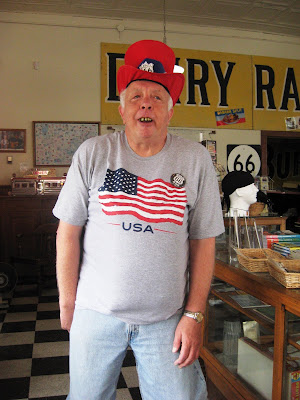 For his manner of transportation, we placed him in the back of our '65 Chevy convertible, where he proudly waved the American flag and practiced the royal wave. 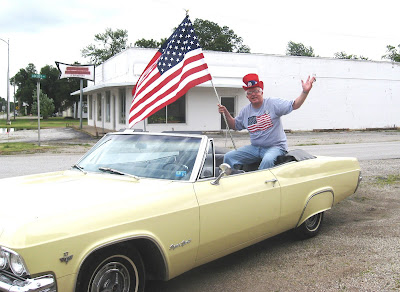 Now, all we needed was a parade.

Alas, it wasn't to be. No citizens lined up behind our festive vehicle. No bands, no floats, no balloons. Eventually, we had to give up and return to reality. And not a moment too soon.

Just after we resigned ourselves to no parade and stopped dreaming and fooling around, a TRUE parade of visitors began to arrive. The atmosphere became festive indeed. It seems that LOTS of folks were celebrating their independence by traveling Route 66, the Mother Road.

And then I realized that we really didn't need a fancy parade. We had everything we needed to make us happy just by having the honor of meeting and greeting our traveling friends from all over the Earth. It was a very good Independence Day!
Posted by Laurel at 5:38 PM

Glad you had a good fourth.