The morning started with another beautiful sunrise over Route 66 near Chelsea. 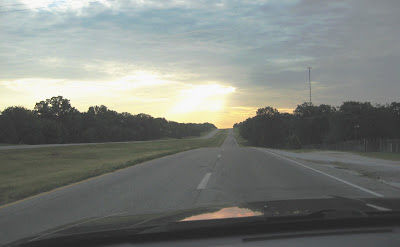 I've been told that we're in for at least another week of ridiculously hot weather. It's taking it's toll on a lot of things, and I'm beginning to think that Afton Station is one of them. There has been an increase in the number of people who stop to take photos of Afton Station but don't get out of their cars. I assume they don't want to emerge from their air conditioned capsules, and I certainly sympathize with them, but they have no idea what they're missing. ME! (Ha ha, just kidding!) But seriously, I'm the one who's missing THEM. I keep trying not to let it bum me out every time this happens, and I think I'm getting better at understanding, however I still feel I'm missing out on 1) meeting lots of great new people and 2) telling them of the wonders of Route 66.

Meanwhile, I was cheered up by a call from a gentleman named Paul from Jamestown, NY. He visited recently, and then later he discovered my website (http://www.postcardsfromtheroad.net/) and called me to tell me that he was moved by my writing so he's going to make another trip to Afton sooner than he'd originally planned. I'm not sure what moved him so, but I needed a little ego booster, so this was nice.
Today, there were only 7 actual walk-in visitors. They came from Vinita OK, Roscommon MI, Whitby Ontario Canada, Broomall PA, and Pittsburgh PA. Lovely people all. For kicks during the down times, Tattoo Man quizzed me from an Oklahoma Trivia book, and I must say I failed miserably. When Betty W. arrived later, she chimed in and did a lot better. Meanwhile, Marly and Kenny continued to sweat it out in the back yard, continuing with the metal building construction.
I bought Betty some fresh rhubarb the other day, and today she arrived with the MOST INCREDIBLE rhubarb pie! Tattoo and I shared a piece, and it was heaven. Betty said she'd make more if I could find her some more rhubarb. So. . . Bye! I'm off to the produce market!
Posted by Laurel at 5:14 PM

Why do some people just want to take a picture and go? I don't understand. It's as if they're just marking things off their checklist: "Picture of 4 Women, check. Picture of Afton Station, check. Picture of Blue Whale, check."
But, what stories will they have? What will they tell their friends when they're showing their pictures? Can they talk about the nice proprieter? Will they talk about the other tourist who, they learned, was born just down the road from them? Will they learn that if they turn east just a little ways down the road they can see Darryl Starbirds museum?

They're only cheating themselves out of some good memories and experiences.