That I am sitting here in a thunderstorm the day after Christmas would seem odd to me except that it's actually been a pretty odd holiday season all the way around..By that I mean unlike any from my past.   There was no Christmas party this year, due to the infirmity of the hostess.  I did not decorate,  unless you count turning on the electric candles in the window which I never took down from last year.  Plug them in and poof -- decorated!

Christmas itself was nice, however.  I   "Face Timed" it with my daughter in Chicago and her boyfriend, an exercise in online holiday-ing which, for about two hours, felt like the real thing.  Getting to that point, however, nearly cost me my grasp on reality. I was so frustrated by getting the iPad to operate properly that I almost lost my ability to breathe.  I thought for while there that I'd need to breathe into a paper bag just to regain my equanimity.   With the help of Ron M., via phone, who suggested I make sure my WiFi router was turned on (it wasn't) and a few tweaks by daughter and boyfriend,  it worked like a charm.

Ron M. and I had decided the day before that he would seek out one of those pre-made holiday dinners that are offered by local grocery stores (turkey, dressing, mashed potatoes, the basics) but when he started calling around to order one, he found that they were sold out long ago.   Hmm.... this caused a little problem.  I first decided to just forget about food altogether.  Ron could eat at his house and I'd throw something together here for myself.   However, my guilt took over and I told Ron not to worry, that I would craft a meal out of what I had in my (quite bare) fridge and pantry.  As a result, I believe that our Christmas dinner was a few notches below those being offered at the local homeless shelter.   At least the shelter offered meat!  Our dinner consisted of acorn squash and creamed peas and potatoes.   A veritable vegetarian feast!  In fact, it was good, although I still hope that the shelter did better.

Two days before Christmas, we decided to take a ride on Route 66 and look for some interesting and festive photo ops for this blog.  We started driving east, then west with little success.   Nevertheless, here are a few things we saw. These are not great photos, but they represent what we observed. 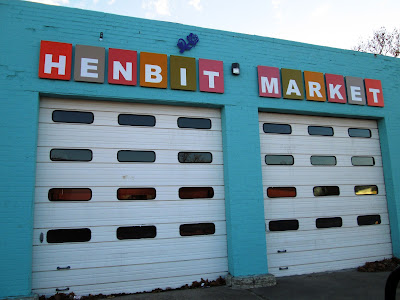 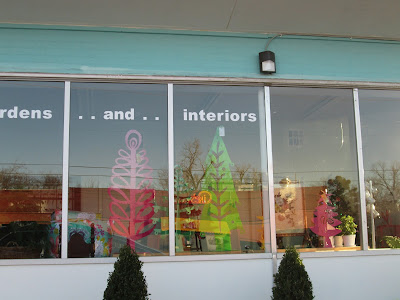 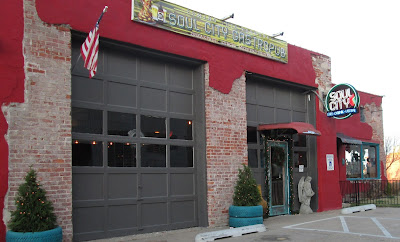 Three new storefronts, all made from rescued buildings.  It's always nice to note that tearing down the old and replacing it with the new isn't necessarily the best way.  In fact, it rarely is.  These restorations give 11th St. (Route 66) a new feeling, and yet they are also a breath of the past. 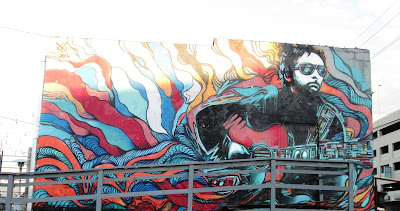 Here's a mew mural on the side of an old building.  I am not sure what it advertises, if anything, but it adds color and eye appeal to the surroundings. 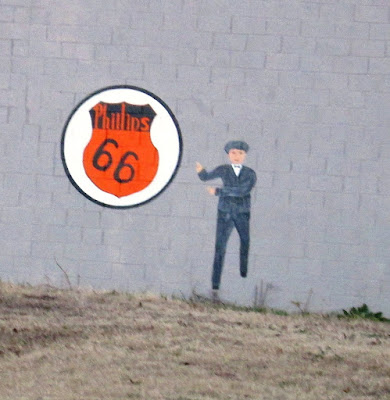 Over on Southwest Blvd. (Route 66 across the river on the other side of  Tulsa) it appears that a new mural is being painted at the Route 66 Village.  It will accompany  the beautiful Frisco train, and the oil derrick. all symbols of the old Mother Road. 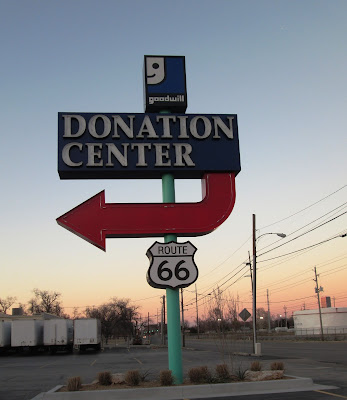 A couple of years ago, the Goodwill erected a new sign in the "googie" tradition, honoring Route 66.  This year, another one went up on  the other end of the property.  We couldn't be more delighted that Goodwill chose to  honor Route 66 twice in this way! 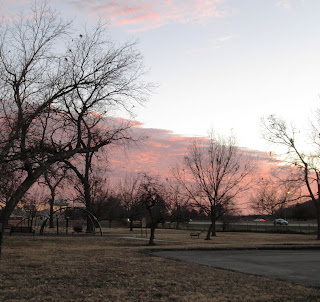 This is not a hill.  This is not a mountain.  This is the middle of Tulsa, just as a big, heavy pink and gray cloud rolls in.   The foreboding density of the cloud reminds us of the major storm that is predicted to arrive here the day after Christmas.  And speaking of storms, we do send our best regards to our neighbors to the south who experienced devastation by tornadoes on Christmas Day.  Our thoughts are with you.
_____________

P.S. Here is my daughter Sarah and her boyfriend John on Christmas morning, via Face Time.  Sorry, I couldn't resist putting this up here despite  the quality.  The reflection of my camera seems to have taken over John's face.   Merry Christmas and Happy New Year!. 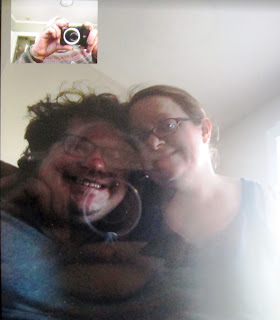 It seems that I've been away from Afton Station and the blog for such a long time that I fear I might lose some of my loyal readers.   I'm still here, and after the Christmas madness passes, I intend to be back to blogging, exploring interesting Route 66 places, and relating stories about what's going on in the life of little Afton.

I had a visit at home from Ron "Tattoo Man" Jones yesterday.  He wanted to show me something.  Well, he sure did!   He has had the entire back of his head shaved and replaced his hair with a very large tattoo of Afton Station!  I don't know if I have words for this, so I'll just say thank you to Tattoo for  his loyalty to the Station, and also warn him to be sure to keep up the shaving, lest Afton Station will be spouting hair in a couple of weeks.  He now has over 150 Route 66 tattoos.  No matter how you feel about the art of  tattoos, Ron  has  to be singled out for his loyalty to the Mother Road. 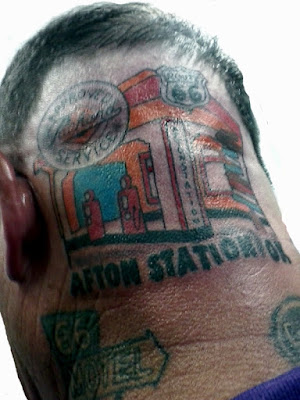 On this beautiful sunny Sunday, our first weekend day of vacation from Afton Station, we were looking for an adventure.  Joe Meeks, our intrepid guide and absolute expert on anything to do with the geography or history of Oklahoma, had remembered that Ron M. and I had talked to him recently about a herd of bison owned by the Cherokee Nation and "hidden away" somewhere in Northeast Oklahoma, but nobody was sure of their exact location.   So, Joe did a little research and suggested that he might be able to find them, and that we should make that a purpose for a nice ride in the country.   Road trip!!

We drove through the Amish country around Choteau and on to Pryor Creek, where we found a good restaurant that has been in the town for well over a  half a century.   Good food!   On to Salina, the oldest town in Oklahoma, established by Jean Pierre Choteau in 1796 as a trading post to trade with the Osage Indians.   It is now a resort community on beautiful Lake Hudson.  On to Kenwood, a small Cherokee Indian town in the foothills of the Ozarks.  The lovely drive was made spectacular by the discovery of the  Blue Hole, a popular swimming spot which we've all wanted to see. 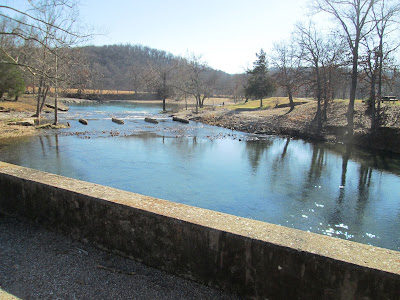 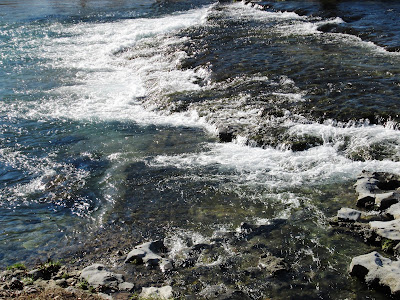 We could only speculate how wonderful it would feel to jump into that natural Jacuzzi which is made by a deep and wide place in the Saline Creek.   We all decided that living in that serene spot with nothing but the sound of river over rocks wouldn't be the worst thing in the world.

South of Kenwoood, we took the road to Bull Hollow, where we hoped to find that Cherokee herd.  Well, we found the place and even saw a few bison at far range grazing on the lush brown grass.    With that, we had accomplished our goal, had a fine meal, and enjoyed each other's company for a few hours. 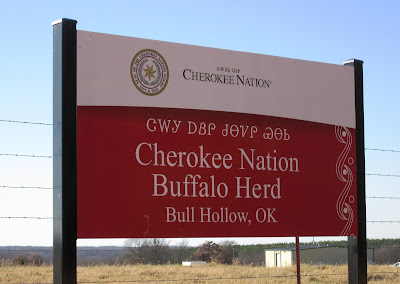 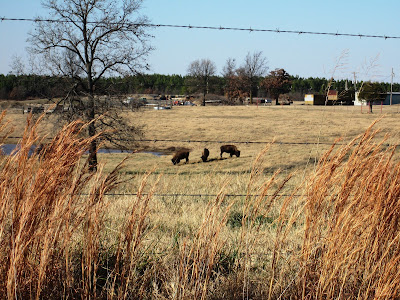 Thanks to Joe, who reminded me of the names of all those places that I'd already forgotten by the time I got home, and to Ron M. who is always fun to be with and who helps me out with this darn wheelchair which tends to make everything more difficult than it needs to be. We look forward to more of our "three Musketeers" day trips this winter.  Any suggestions?
Posted by Laurel at 6:00 PM 1 comment: