Happy Saturday! I think Ron M. decided that Afton Station's slogan, "Cleanest Restrooms In Town", was starting to be less than accurate lately, so he took it upon himself to scrub the whole bathroom, including the floor. I've been too busy (make that too LAZY) lately to do much more than scrubbing the sink and toilet. Now we're back on track. Thank you SO much, Ron! (Since there aren't other public restrooms in town, I believe we can continue to feel confident about the slogan anyway.)

Today was all about the visitors, and there were plenty of them. Those who agreed to stand still for photos included this lovely couple from London, England who are on their honeymoon, having been married a week ago today. When asked why they chose Route 66 for their wedding trip, they answered that they wanted to do something "different". I'm happy to report that they're enjoying it very much. See how happy they look! 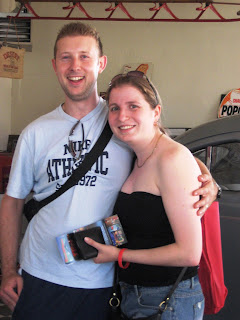 These folks from Mountain Grove, Missouri were celebrating a recuperation from surgery and checking out Route 66 in the area. They gave us some valuable information about the Western Motel on Route 66 in Vinita, another old but clean mom 'n pop motel that we can now recommend to others who ask. 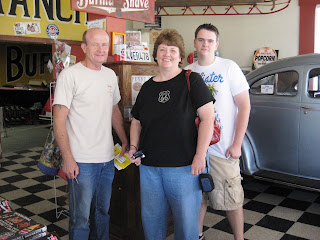 This gentleman from Soper, TX has in his possession a photo of himself as a boy riding the stuffed buffalo at the old Buffalo Ranch. I asked to be sent a copy and his wife graciously agreed to do that. I'm trying to collect as many of those as possible, and I know Betty W. is also interested in having Buffalo Ranch pictures. I told him that when I received the scan of the picture I'd put it on the blog as a "before and after". Stay tuned. 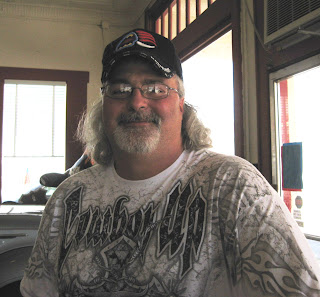 Others, unphotographed, came from Topeka KS, Bentonville AR, Wisconsin Dells WI, Cicero IL, and Afton, Miami, Claremore, Sapulpa, Grove, and Northwest OK. There were about 30 guests, but I may have missed a few in my count.

The new showroom is coming together, although somewhat slowly due to all the rain we've been having as well as a few other complications. The slab is poured and now the burying of wires, drains, etc. are keeping Marly and his crew busy. Once those things are done, it is hoped that the rest of the building will rise quickly. We're all hoping that it will be mostly completed before David gets home from his vacation around the first of August. 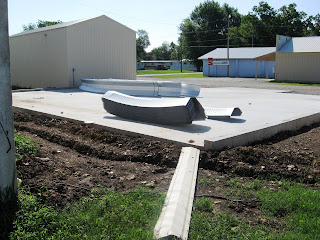 Tattoo Man minded the store yesterday, and he had his hands full with 21 visitors. A glance at the guest book told me that he had a number of foreign travelers as well as local folks.
Posted by Laurel at 5:44 PM

Hiya,
Just thought i'd post a quick message on your Blog to say both me (Martyn) and my new wife (Jane) were the couple who stopped in on that day to see the shop on our honeymoon. We eventually made it to Santa Monica, CA and have many photos from start to finish including a few of your shop which we've uploaded for friends/family to see on Facebook.
We've been back to our house and normality for a few weeks now in Carshalton, Surrey UK. Can't wait to do another trip soon though and explore.
Thanks once again for including us in your Blog.
Martyn Hopping & Jane Hopping

Martyn -- Thanks so much for the note. It's always nice to know that people are reading the blog. It was great fun meeting the "honeymooners", and I'm pleased that you arrived home safely. I would enjoy seeing your photos, if you wish to share.