I finally found the close-up pictures I took a couple of years ago of the little model gas station I have on display at Afton Station. As you can see, up close you can't tell you're looking at a miniature. I'm always amazed by the detail put forth by the artist. 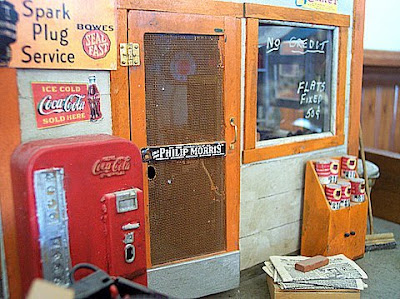 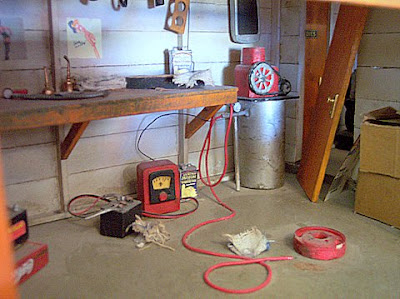 Since this blog is supposed to be about Afton Station, and since I wasn't there tomorrow or today, and won't be there again tomorrow, I thought I'd tell you what I did on this day off. You might want to click to something more interesting, and I wouldn't necessarily blame you, since you came here to hear about running a Route 66 business, not about me running errands. But that's what I did today.

The day didn't start out routinely at all. The wind was blowing mightily and the air was frigid when I walked out to the car at 6 a.m. to get to the grocery store early enough to beat the crowds. Well, that didn't exactly work out. I had a flat tire! Thank God for the Triple A! The very nice guy was here in about 20 minutes and had to remove a lot of Afton Station junk from my trunk (see, there's an Afton Station reference, so I'm on topic) so he could get to the spare, which is just one of those little "donut" tires. That done, I proceeded to the grocery store and purchased over $100 worth of food for Thanksgiving dinner, which I'm hosting for either 7 or 8 people. I didn't have to get a turkey because my ex-husband fries one for me each year. When we broke up, he got the turkey frying apparatus, so it's become his job ever since. LOL! Fried turkey is GREAT!!
On the way home from the grocery store, I stopped at a little hole-in-the-wall tire place (where I'd never been before) and discovered a real gem of a service-oriented business. Apparently they've been in business for over 30 years. The owner was no spring chicken, nor was the guy who repaird my tire, which had a screw in it. He then took off the donut, replaced the good tire, and repacked it in the trunk. This whole operation took about 5 minutes and cost a whopping $4. Thank you, Bill's Tire Service. I'll be back.
Right after I got home I got a call from a friend, letting me know that another good friend had passed away last night. Terry was a great guy. He had beaten lung cancer 8 years ago -- or so he thought -- but it returned a couple of months ago and after that it went pretty fast. He died after only two days in a hospice, so it was quick. He will be missed. At his request, we are going to plan a gigantic crazy party in his memory shortly after the holidays.
I spent the rest of the morning doing some prep for Thanksgiving. Since I get my turkey delivered all cooked, every year I have to find a way to make gravy. I refuse to use canned or fake gravy, so a month or so prior to Thanksgiving I start roasting turkey parts and rendering the juice and fat. This morning I roasted four thighs, and along with what I've already collected, I think I now have enough to make a decent amount of gravy. And, I also have lots of meat to make turkey salad or turkey soup!
I also made cranberry sauce out of -- would you believe -- last year's cranberries. In October 2007, on a visit back to the East Coast, Ron and I visited a cranberry bog in Massachusetts as the guests of the president of Ocean Spray. I was still pretty crippled from my stint in the hospital last year, but Ron got right out there in the bog and collected many MANY pounds of cranberries . I made tons of cranberry sauce last year and stuck the rest of the berries in the freezer, totally forgetting about them. When I took them out this morning, they were still absolutely perfect, so I made a gigantic pot of sauce. I put raspberries and blackberries in my cranberry sauce for sweetening and an interesting flavor. 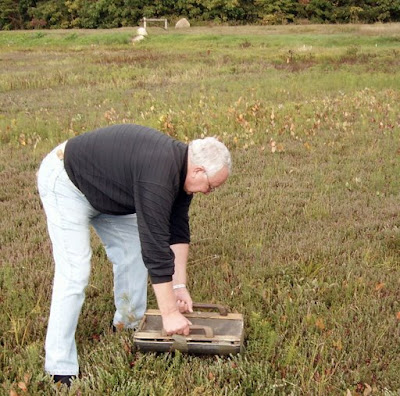 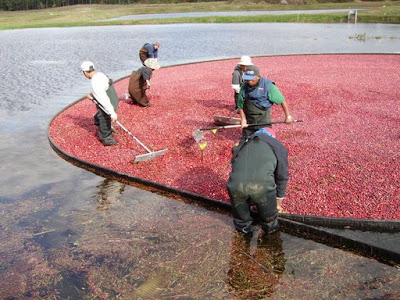 Harvesting the cranberries after flooding the bog so that they float to the top.

At noon, I went to Ron's house for lunch. His neighbor had given him some sort of rice and dill pickle concoction which she said was a Russian dish, so we ate that. It was.... er... different, but quite edible. On the way home from Ron's house, I stopped at the liquor store and bought the wine for Thanksgiving. My favorite, Blackstone Merlot, was on sale!
So, here I am, finished with errands and doing the favorite part of my day, computering! I won't be going to Afton Station tomorrow either, but I promise not to bore you with another blow-by-blow description of my day. I'll be back in Afton on Saturday.
Posted by Laurel at 3:13 PM

How cool to get to do the cranberry thing, I think that would be fun.

Glad you are getting a few days off to get things done.

While you're not at Afton, take a peek at my blog -- Ron has posted a YouTube video of Scout talking.

First of all, I'm so sorry about your friend's passing. I bet your party will be a fine tribute!

Cool pics of the cranberry bog! I find the harvesting fascinating.

Beth, until I saw this in person, I had always thought cranberries grew in water! That scoop you saw me with is the old, backbreaking way of getting the berries. Now it's more sophisticated and the entire harvesting process is quite interesting. If you're interested, you can see more pics at:

Scroll down about half way through the album.

Errand Runner For You is now serving Brisbane. we run Prescription, Grocery, Courier service, packaged mail, check when you're away. check our website for more info. Errand Runner Services For more available services.