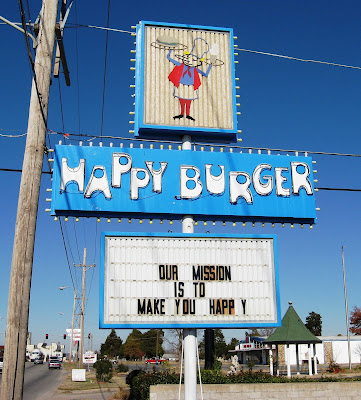 I've been wanting to try a little 50-year-old Route 66 burger joint in Sapulpa called Happy Burger for some time. Today, I had the chance. While running a few errands in that town with Ron, we decided to stop and check it out. We were pleasantly surprised by the food, the friendliness, and the decor. The owner is apparently a huge Pepsi Cola memorabilia collector, because the place was full of pretty neat stuff, both new and old. The lady at the grill (the owner? Not sure) couldn't have been more friendly and accomodating as we sat at the counter and wrestled with the big, sloppy chili burgers. Yum! They were way too big to just eat like regular burgers, so we attempted eating them with forks, refusing the waitresses offer of a plate and knife, which was probably a mistake. Ron Warnick of Route 66 News recommended the peanut butter milkshakes there, but we didn't see them on the menu. 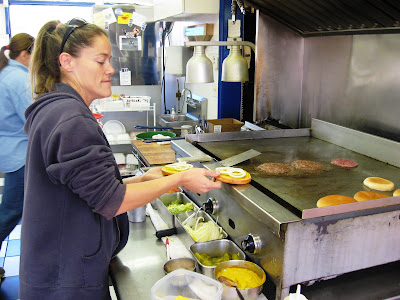 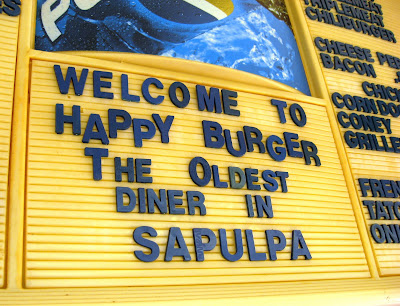 And while on the subject of restaurants, the other morning when it was still dark, I stopped on 11th St. in Tulsa to take a picture of the neon on one of Tulsa's best Route 66 restaurants, Tally's Cafe. It's not a bad picture, considering I don't have any special lenses for photographing neon. Tally's is another casual, diner-style place with good home cooking. 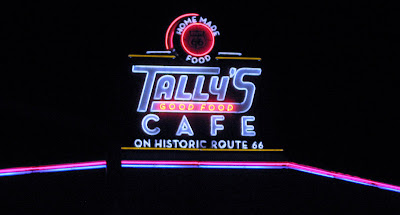 Have to admit, I have never tried a peanut butter milkshake, but is sounds yum :o)

Great signage, and good to know that if we stop in Sapulpa, The Happy Burger is a good place!

Have a great weekend!
Hugs, Beth