... or at least the tourist season's over, I think. Today was extremely quiet at Afton Station. Fortunately, Ron M. accompanied me there today, and Betty came by and stayed for a couple of hours, so it wasn't boring. But, there were only four visitors, and they arrived in pairs.

The first couple was from Boston, on one of the last legs of their west-to-east Route 66 trip. They were in a bit of a hurry to get to Kentucky for Thanksgiving, where they were picking up a car owned by their son who was just deployed to Iraq with the Army. Their haste didn't stop me from recommending a few "must see" Route 66 stops in Kansas and Missouri.
The second couple hailed from France, and didn't speak a single word of English. That made communication rather difficult although, I'm ashamed to say, I took 4 years of French in high school and a couple more semesters in college. It's incredible how much French I've forgotten! I think it has to do with the teaching method that was used in my high school, where we listened to specific phrases over and over again in a "lab" with headphones. In the long run, it was only practical if, in later life, one needed to know how to say sentences such as "By the way, who are you going to invite to the senior prom?" or "Fix my flat tire", both of which I have down pat. LOL! At any rate, the French couple was very nice, and we gestured to one another a lot. I'm always amazed that non-English speakers can make their way across America without too much effort, but then I think back to the times I vacationed in foreign countries without knowing a single word of their language. I guess everything is possible if you can point and gesture effectively. Body language works just fine.
We left for home early when we realized that business had slowed down to a snail's crawl. Since I didn't take any pictures today and my philosophy is "a picture for every entry", here's one of those great ones that Doug Smith took the other day. The subject isn't great, but the photo is high quality, and you get a good view of the mess all around me. 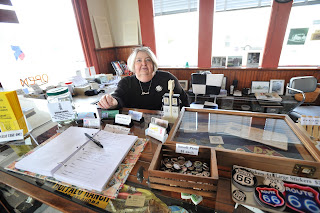 If you're weather is anything like ours at the moment, it's not surprising that no one's taking road trips right now! Brrrr, I hope you're warmer than I am right now!

Beth,
It's warmer here, and no snow. It went up to 55 today, and supposedly even warmer tomorrow. Looks like I'm definitely warmer than you are. Sorry... :-(

You'd BETTER have gotten this translation from your brother in Paris or from Babelfish or something, 'cause if you were standing right next to me when I was struggling with talking to those folks and didn't jump in with your astounding ability to speak French, I'm gonna have to fire you! :-)
But seriously, I can read what you wrote with no problem but I just can't write it. (RAHV)