Signs of the times

Little moments of self-understanding keep happening to me on my early morning drives to Afton. I like to think that these are things I've known all my life, but that I'm just beginning to know myself well enough to understand what I've known all along. Here's how this relates to Route 66 and Afton Station. . .

Background, for those who don't already know: Before moving to Oklahoma 7 years ago, I lived in a Connecticut suburb of New York City. Life was good in the fancy CT suburb, so I didn't quite fully realize how much I yearned to get back to my midwestern roots.
On the way to Afton this a.m. I was listening, as I often do, to Howard Stern on the radio. I usually get a perverse kick out of his raunchy, funny, irreverent show, but today it simply ('scuse the expression) pissed me off. Howard and his cohorts spent a full hour whining about having to drive for an hour out to "the sticks" of New Jersey to attend a co-worker's wedding this coming weekend. There was a lot of laughing about how they'd have to take extra water along for the trip, what kinds of hicky people they were apt to encounter "out there", and how ridiculous it was to be asked to drive for a "whole hour" anywhere. Give me a break! For one thing, it's New Jersey! You can't drive anywhere in N.J. an hour out of NYC and not still be in what I consider the city. But what really bothered me the most is that I guess I'd forgotten how provincial New Yorkers can be. They talk about those of us who live west of the Hudson River as rubes who know nothing of the "real world" (L.A. being the exception). Oh, if they only knew. If they only knew that we're the lucky ones. If only they would take that giant leap across the Hudson and check the rest of us out. {I confess to doing some stereotyping in this rant, and I do recognize that there are plenty of "in the know" East Coasters, but I still maintain that the prevailing attitude is as described.}
Anyway, I angrily switched off the radio and decided to bask in the joy of being exactly where I wanted to be. A peace fell over me as I cruised through the countryside and small towns, saluting the usual cows, checking to see if any of the farm wives had hung laundry to dry on this very windy morning (they hadn't), and watching puffy clouds race across the sky. In a New York second (ha ha), I had recuperated. By the time I got to Chelsea, I felt like taking some pictures. In the two-block-long town, I found three vignettes I felt were worthy of a quick photo. As picturesque as, let's say, Times Square or the Chrysler Building? Maybe not. Or are they? 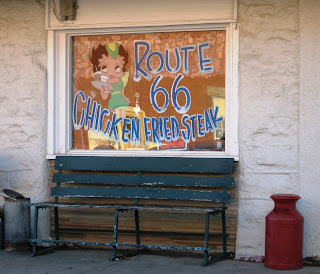 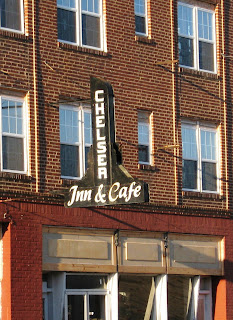 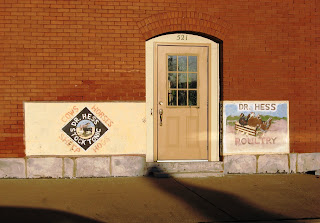 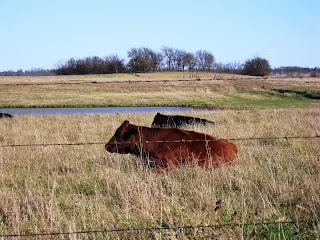 It wasn't a busy day at Afton in terms of tourists, but it was busy nonetheless. Marly and Betty both dropped in, and David was there for most of the day. A couple visiting from coastal Alabama were launching out on a three week tour of Route 66 and the west. They stayed a very long time as the husband was an avid car collector who showed a strong interest in purchasing our 1930 Model A pickup. An elderly gentleman who had just lost his wife two weeks ago (on their 50th anniversary-- how sad) also stayed for a good bit of time. He owns a Hupmobile very similar to ours. He lives in Joplin and plans to return soon. Another man came in to talk to David about restoration of the Citroen. It was definitely a car day and not so much a Route 66 day. But that was fine. I had a good rest while David handled the majority of the visitors.
Posted by Laurel at 4:45 PM

Sounds like a good day. Sometimes we need to change our routine a little to stay grounded.

I love living in the Midwest. There's no place I'd rather live. It's always fun to visit various places and cities, and Ken and I have a great time while we're there. But I'm always happy to come home to Nutwood. :)

I'd like to think that most city dwellers don't think we're foolish for living where we do...it's just a different mindset and point of view. Some, like Howard and his cohorts, do seem to have the attitude that we're all a bunch of hicks. I don't really care what they think...I see great charm and have a great life here in Hicksville. LOL

Glad you had a good morning after you turned off Howard!

Laurel
Reading posts like this remind me why I love my OK friends so much. Sometimes it is exactly what is needed to just sit back and relax, and enjoy the little things around us that make up every day living, and the things that truly matter.

For me, those things are my family and friends, having a roof of our own and food in the refrigerator. And knowing that I have friends up and down the road just like you that are living a dream every day, whether they are in Afton or Los Angeles!