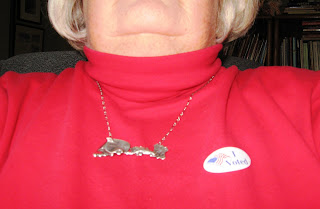 I was third in line at my polling place, having arrived at 6 a.m. I sat in my car until a couple of other people came at about 6:15 because I didn't want to stand alone in the dark. By the time we were allowed in at 7, it had become light and the line wrapped around the block. I was finished and back in the car by 7:10, feeling very good. It almost brought tears to my eyes to stand in that line with all sorts of folks of every race age, and walk of life, all of us doing what we're lucky enough to be able to do. I could tell that others were moved by it, too.
I rewarded myself with a trip to IHOP, where I've only been once or twice in my life, but whose recent TV ads for apple pancakes have been tempting me for weeks. They sure know how to photograph a pancake! The reality was, as could be expected, not nearly as visually appetizing, but it tasted pretty darn good.

Then I decided that since I closed Afton Station today, I should at least do something Route 66 related. I've been wanting to visit Frankoma Pottery, which is on Route 66 in Sapulpa, west of Tulsa. They have recently come under new ownership and I'd heard they had a nice display of their vintage discontinued patterns as well as a new Route 66 visitors' area where possibly they would be willing to distribute my Afton Station brochures. Both were true. The gallery of old patterns was extensive and quite interesting, with many hundreds of examples dating back to 1933 when Frankoma opened. http://collectingbuzz.com/articles/frankoma.html.
The very nice new owner said he would be pleased to add my brochures to several dozen more on the racks. While I was there, I also ordered a platter to replace the one I broke several weeks ago. T'was a very worthwhile trip on a gorgeous fall day.

My daughter, who lives in Chicago, called to give me some reassurance because she was pretty sure I'd be worried about her going downtown to the mob scene that is sure to be the Obama rally tonight. I was. She and her husband decided to do their celebrating in a local bar with friends. Sounds a lot safer to me, although I'm sure the big Obama bash would be a lifelong memory for them!

This afternoon three of us are going to the movies at 4, then I'll be home to glue myself to the tube and wait for results.
Posted by Laurel at 11:39 AM

Everyone I've emailed with or talked to has said that they also felt very emotional about this election. How can you not?

Good news about the pottery place. That sounds intriguing, and I'm glad they were happy to display your brochures.

The latest I'm hearing is that there could be a million people showing up at Grant Park tonight. Mayor Daly has said that no one will be turned away. How exciting...but I have to admit, I'd rather watch it on TV than be in such a huge mass of humanity!

Glad you did not have long lines for the vote. The pancakes sound yummy :o)