First at the Finish Line at the Route 66 Marathon! 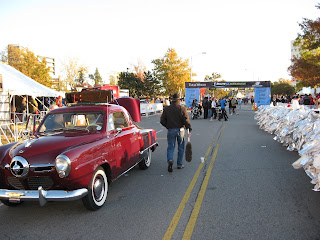 Ok, I was in a car. But even so, I'm sure it's the only time I'll ever be on a marathon course, and certainly the only time I'll be first over the finish line! When David's 1950 Studebaker Starlite was chosen to be the Pace Car for the Tulsa Route 66 Marathon (http://www.route66marathon.com/), he invited me ride shotgun with him. I couldn't resist, so I abandoned Afton Station to Tattoo Man for the day and accepted the invitation. Ron McCoy came along, too. We arrived almost an hour early, and the starting line was already a hive of activity. It's amazing how much prep it takes to put on a big 8,000-runner event.

The chairman of the marathon, Chris Lieberman, greeted us and showed us where to put the car just ahead of the starting line. We met the two motorcycle police officers who would be leading the "parade" and making sure all the intersections on the course were closed to traffic. We also met a really cool police officer who would be riding with us and sending (via his radio) reports to the finish line. Since his "real" job on the force is head of the Gang Division, we plied him with questions about the state of gang activity here in Tulsa. Very interesting indeed!
David is my ex-husband. His new wife, Sylvie, was running a leg in the Relay division of the race. Along with the regular 26.2-mi. marathon, there was also a half-marathon division, a 1/4-marathon division, a wheelchair division, and a children's division (on an entirely different course).
I learned a few things today. For one, being in the Pace Car isn't exactly the best place from which to take photos. Ron took a few out of the rear window, but they didn't really show how cool it was to see those 8,000 people following. I took dozens out of the front windshield, of which two were worth keeping.
I also learned that the Pace Car driver doesn't have as cushy a job as one might think. With no power steering in the Studebaker, making some of the turns was dicey. Also, once we got to the point where the course had switched back and there were runners both with us and running against us in the other lane, it was tricky for David to miss some of the runners who, because they had iPods in their ears and couldn't hear the police sirens or our horn, just veered out in the path of the car. David had a pretty big job of making sure everyone on the course stayed safe as we passed.
As soon as we got there in the morning, they strapped the big timing machine to the top of car. You can see it in one of the pictures below. My huge, important, responsible job (LOL!) was to push the button to start the timing machine at the exact second that the gun went off at the start. I executed the assignment flawlessly. My index finger was really the only part of me that got any exercise for the whole 26.2 miles, but for that I think I deserve a big plate of carb-laden pasta tonight, don't you? :-) 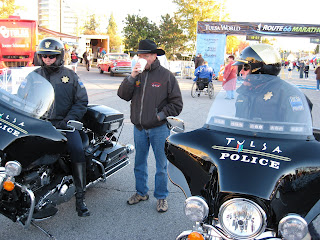 That's David (my ex) chatting with the two police officers who would be with us for the whole course. 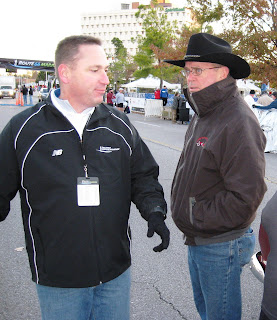 Here's David with Chris Lieberman, the Chairman of the Route 66 Marathon. 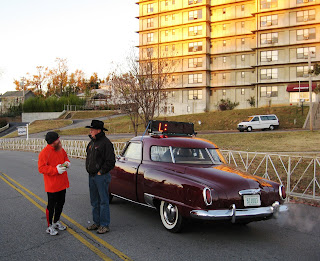 Here's the car at the start, waiting for the race to begin. Can you see the timing device on the top of the car? (If you're not familiar with Studebaker Starlites, that's the back of the car you're looking at, not the front. It's hard to tell.) 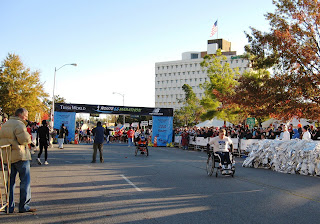 There were only two entries in the wheelchair division this year. Here they are at the start. It's hard to see it in this picture, but behind the overhead banner are all the other racers, waiting for their start to come two minutes later. Those shiny things on the right are the warming blankets given to each runner at the end of the race. Did I mention that it was COLD today? 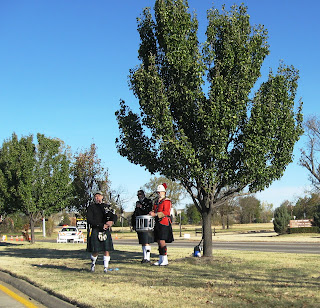 There were some bagpipers along the route. There were also bands and combos in about a half dozen places along the course, music blaring. Although we were only going about 10 miles an hour, I still failed to get any good shots of the bands, the crowds that lined some parts of the course, or anything else. 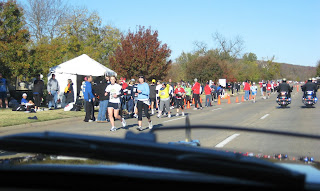 After the course turned 180 degrees, we started to see the slower people and the half-marathon people coming toward us, which made the ride a little bit more fun. I still don't know who won the marathon, since as soon as we finished the race we drove the car over to the car show portion of the festivity. We didn't stay long, however, because although it was sunny, it was very cold and windy and not very pleasant. It was a small and frankly unimpressive car show, but after all, the attention and glory should go to all those incredible athletes who finished the course, not to a bunch of old cars. All in all, it was a great day and I'm so glad I accepted David's invitation!

Sounds like a great time! How can you go wrong riding in a beautifully restored Studebaker?! Love the bullet nose--I believe they have at least a couple of those at the Museum. I haven't checked my pics yet to see if I got a picture of one.

I did the half today and promptly wished I'd opted for the quarter. I haven't had any time at all to train this season, so I walked the first four miles or so with a nice couple from Dallas who were walking their first quarter-marathon, and then I picked it up a little bit for a few miles in the middle. But mostly I walked. And walked. And walked.

I dearly wish I had time to train again. This not-running is really getting to me. Maybe I'll get it all under control after Christmas break....

Glad you had fun being a pacesetter today. The pictures are great and the car is cool :o)