Since I don't go to Afton Station on Thursdays, I like to devote a piece of my day to exploring some portion of Route 66 in an attempt to discover things I've never seen before. That's not particularly easy any more, since I'm getting intimately familiar with everything on Route 66 for about 80 miles in each direction out of Tulsa. This morning I drove as far as Depew, meaning I went through Sapulpa, Kellyville, and Bristow along the way. I didn't see anything I hadn't seen before, but I found a few things that were of interest.

In Sapulpa, I stopped again at Frankoma Pottery (talked about in a previous post and at http://collectingbuzz.com/articles/frankoma.html) in order to drop off some Afton Station brochures for their Route 66 lounge and information corner and ask permission to take a few photos of their amazing vintage Frankoma collection. Permission granted, and here are a few shots. This is a mere fraction of the long wall of old Frankoma patterns represented there. 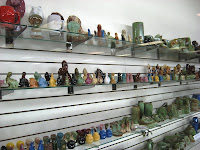 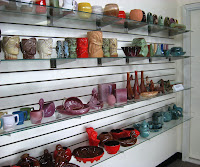 In Depew, I couldn't resist an interesting doorway. Back in Tulsa, I found myself following a truck that was delivering large concrete "Route 66" planters to various places on 11th Street. They started distributing these a few years ago as a part of the Route 66 preservation initiative here in the city. The planters are really wonderful, because they're a whole lot more difficult to steal than the regular Historic Route 66 street signs, which seem to disappear no matter how well they're fastened to the poles or how high they're hung. Of course I took a picture, but since it was taken out of my windshield while waiting at a red light, it's not the best. 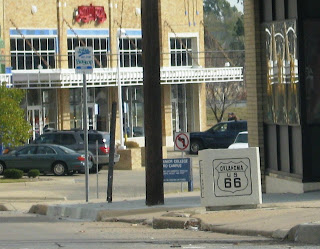 On 11th St. near Peoria Ave., funds from the same initiative are being used to build a.... well, I'm not sure what you'd call it.... a giant pedestal (?) on which will be erected the iconic Meadow Gold Dairy sign that for decades stood at 11th and Lewis Ave. When the owners of the 11th and Lewis property said they were going to destroy the sign, it was fortunate that funds were available (through private donations and other sources) to dismantle it, repair the neon, and re-erect it. Since the sign is beloved by those who have lived in Tulsa for many years, this is a very good thing. Here is the sign as looked at 11th and Lewis. 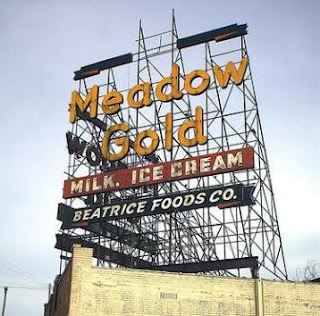 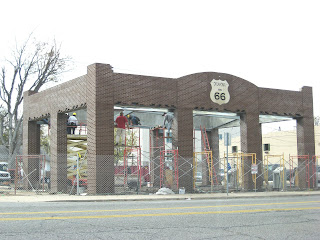 Wow, they really do have some interesting looking pieces of vintage Frankoma. I need to go see that!

So glad they were able to save the sign! I may have mentioned it already, but one of my favorite things to do is take pictures of googie signage. You can find it everywhere, and Vegas has preserved a lot of their vintage signs!

I have another memory concerning that Meadow Gold sign.

Every few months I would need to go to the Allergy Clinic of Tulsa for asthma treatment. We would always drive past that sign.

That was just one of the landmarks I would always recognize. I always think of that when I see it.

Laurel, if you ever decide to come visit Oklahoma City, let me know. I live in Edmond, near 15th and Boulevard, and I'll show you around.