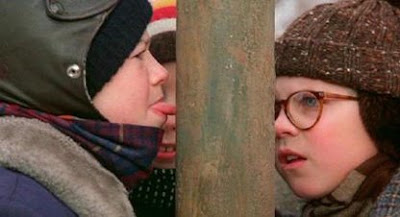 This has nothing to do with Route 66 or Afton Station, but last night, I watched my DVD of "A Christmas Story" for the first time this season. I'm quite sure it won't be the last viewing, however. It's one of my favorite movies. I could watch it repeatedly all year, but I prefer to save it as a treat for the holiday season. It's an outstanding movie, but means even more to me because so many of the exterior scenes are filmed in Cleveland, Ohio where I grew up. The nostalgia I feel when I watch "A Christmas Story" exceeds that which I feel about anything else. Although most of my childhood took place in the early '50s rather than in the late 1940s which are depicted in the film, there's a great deal in the movie that's identical to my youthful Christmas experiences. The scenes of downtown Cleveland decorated for the holidays, the Cleveland Christmas Parade, the visits to Santa at Higbee's Department Store, are all cornerstones of my childhood holiday memories and were recreated perfectly on the screen.

"A Christmas Story" was made in 1983, and I've never missed watching it at least once each season since then. If you haven't seen it, and even if you're much too young to appreciate the nostalgic aspects of it, I still recommend it as one of the most humorous and well-made holiday films ever made. (Can you tell I'm a fan?) 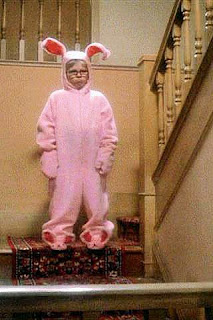 My friend Ron Warnick has an outstanding blog entitled Route 66 News, the "go to" place for the most updated news of everything happening along the Route. Since Ron's wife ran in the marathon yesterday, he was on hand to take some photos from the new Route 66 Cyrus Avery overpass as the runners passed beneath it. Go have a look at Route 66 News. Scroll down 5 or 6 entries. Be sure to note the old Route 66 Cyrus Avery Bridge as seen from above, bracketed by the two newer bridges.

I'll be back with Afton Station news tomorrow. Today, I'm home making lists for what needs to be done in preparation for Thanksgiving dinner next week.

I'll be sure to bookmark Ron's site. Could be some valuable information for our planned 2010 trip.

Christmas movies already?! Laurel, it's not even Thanksgiving yet! LOL

My favorite holiday movie is "It's a Wonderful Life." I can't watch it without choking up!

"A Christmas Story": Best. Movie. Ever.

I seriously think this is quite possibly the best film ever made. I actually owned a 20" replica of the leg lamp for a while. It went to live at the Southside/Westside Community World office for a couple of years. When Eye Candy unceremoniously pink-slipped our whole section last spring, I sent the lamp downtown with a guy who'd just been transferred and was feeling some survivor's guilt about it. I think it's now gracing his cubicle at his new office (he took a tech writing job a couple of months ago).

Emily,
Last year, I was at that that place on 11th St. that sells mannequins and it kept going through my mind that I might be able to get them to sell me just a single leg, out of which I could craft a lamp. Some day, maybe....

I read Ron's site everyday, too.

There's a man, I can't recall his name, who is SUCH a fan of that movie that he set up a company to manufacture those leg lamps. He even bought the house where that movie was filmed and restored it to the movie condition.

Trevor, I've heard about that guy, and the next time I get back to my hometown of Cleveland, the original house is first on my list of things to visit. It's on Tremont Avenue. I've already looked it up.