I left Tulsa early this Veteran's Day morning, intending to stop in a few small towns to photograph their veteran's memorials or monuments. I couldn't find any! I looked in Catoosa, Foyil, Chelsea, and Vinita, to no avail. These are all tiny towns, so a quick drive down Main St. and a couple of side streets pretty much covers them completely. Nothing! Maybe I was just too bleary-eyed at that early hour and missed something.

So, instead I stopped in Foyil to snap a picture of a monument to a different kind of amazing person, Andy Payne. Andy, a young Cherokee farm boy from Foyil, won the 1928 Great Transcontinental Footrace. Against extreme odds (and lots of professional runners) he endured the Route 66 course from L.A. to Chicago, then on to New York City, a total of 3423 miles. And he won! He returned to Foyil and in later life made a name for himself in Oklahoma government. For all I know, he may have been a veteran, too. I'm not sure. His story is one of many personal odysseys accumulated in the 82 years since Route 66 became an official highway. Today is Route 66's 82nd birthday! 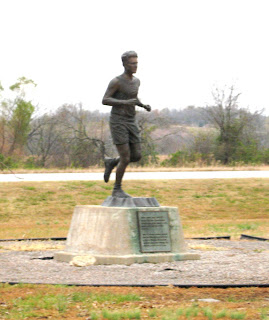 I've never seen goats wearing coats before, unless they were wearing them just before being judged at a fair in order to keep their real coats clean. Nevertheless. I passed these guys today -- and it's not even cold outside! Because of their placement and the early hour, this was the best photo I could get without running the risk of being chased out of the yard at gunpoint. (They look like sheep in this picture, but believe me, they're goats. I used to raise sheep.) 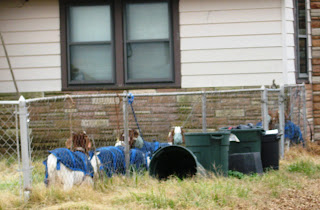 News from Afton Station: I got there at 9, and my first chore was to clean up the mess created by David and Marly defrosting the fridge last night. Quite the flood, and not enough towels to clean it up. However, by the time the first guest arrived, all was back in tip-top shape.

The first guest was an Arkansas guy just coming in to look at the cars. But shortly thereafter, four people from Belgium doing a large segment of Route 66 (Amarillo, TX to Springfield, MO) came for a visit. They were a charming bunch, and two of them spoke great English, so we did a lot of chatting. I was very impressed by their enthusiasm for everything I said and everything they saw at the Station. They bought an Images book, the pictorial tour of Route 66 that so many foreign visitors appreciate.
David was there working on a car for most of the morning, and I had a couple of more visitors drop in before I closed early and left at 2 p.m. I have a meeting tonight so I needed to get home and prepare for it.
For years, I emailed with a gentleman named Doug Idlett who was a veteran of WWII and was a prisoner of war for several years in the Phillipines. I met him a couple of times in person too, and was always impressed by his incredible stories, good health, and youthful outlook as he was a bit over 80 years old. I lost track of him recently, but am still trying to find him. Hey Doug.... if you happen to be reading this, hello! You know I have never forgotten you on Veteran's Day, and you can be sure my thoughts are with you today as well.
Posted by Laurel at 3:46 PM

The Bunyon Derby! Thanks for the picture of the Payne monument. Very cool!

I didn't realize this is the Route's birthday. A special day in many ways!

Sounds like a good day at Afton, with a little more activity than lately. Great to hear.