Kids, Skunks, and MANY visitors!

The little trick-or-treaters were in battalions last night. It was Friday, it was warm, and all favorable conditions were in place. My 9 bags of candy were gone in less than 90 minutes, and that was after reducing the "give" to one little wimpy candy bar for each kid in order to stretch it a bit further. My historic Tulsa neighborhood is mostly middle-aged boomers without small children, but they bring them in by the vanloads from other neighborhoods. I didn't recognize a single kid, but they were all cute and, for the most part, very polite. 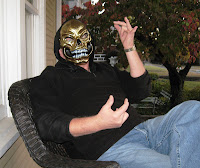 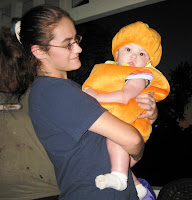 On this 2008 morning-after-Halloween I came across no well-endowed giant cowboys to photograph on my way to Afton. Or, maybe I did but I just don't know it. The first half of my drive was in darkness and fog. For the second half, it was just fog. That's FOG with a capital F! Oh my goodness, I was about half scared silly. I've done lots of fog before, but this was by far the pea-soupiest! Either the theory that when one sense is restricted, another will be heightened is true, OR there was the Great Halloween Skunk Massacre on Route 66 last night. I whiffed the remains of no less than 4 skunks on the 80 mile trip to Afton (couldn't see them... fog, you know). One essence was so strong it remained with me in the car for at least 2 miles. I thought I was going to have to douse myself in tomato juice when I got to the Station.
A wonderful surprise when I arrived was to find that Marly had fixed the wooden "OPEN" sign that was damaged by wind last month. He screwed it back together, much stronger this time, and painted the word "FREE" in black letters and reinforced the bottom so it's less likely to have another wind-related accident. Thanks, Marly!
Forget what I wrote the other day about tourist season being over. Today was a veritable madhouse at the Station. Marly was there with me for most of the day, and we had 19 (almost 21) visitors. The last two folks arrived as we had locked up and were in our cars. Sometimes I'll reopen in that case, but these two men said they would be in the area tomorrow and would come back. That was nice of them.
Visitors included two separate couples from Great Britain, one from London and one from Sussex, and also people from Mt. Vernon MO, San Bernardino CA, Kansas City MO, and Oklahomans from Claremore, Bartlesville, Kingfisher, Fairland, and Oklahoma City. One of the British couples had an interesting story about finding a book in their room at the B&B last night (in Baxter Springs, KS) that had a chapter about their tiny town in Sussex. It was a book they'd been looking for for years back home, and had never been able to find in England.
I try never to discuss politics at Afton Station, but my hackles were raised by an elderly visitor from Missouri who declared with absolute certainty that Barack Obama is a Communist and if he's elected it will be the downfall of the U.S. Naturally, I couldn't let that lie there unchallenged. I confess that I raised my voice a bit in dispute. I think it frightened him, because he changed the subject and asked me a question about a car. LOL!
In 1948, a little boy and his family lived in one of the 2nd floor apartments across the street from Afton Station (then called the Eagle Standard Oil Station). When he was about 10 years old, his parents bought him a Brownie box camera, but when they brought it home to him it was already after dark. His parents discouraged him from using the camera until morning, but he couldn't resist so he leaned out the window and snapped this shot. A couple of years ago the man, whose name I've forgotten, brought the picture to me. It's one of only two photos I have of the station when it was actually a working station, and it means a lot to me. 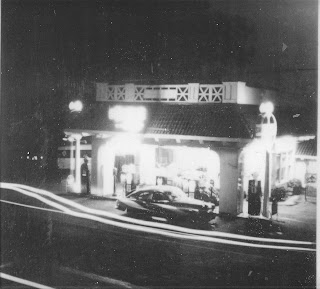 Wow, what a hoppin' time on All Hallow's Eve for you!

I know what you mean about fog. When it's extremely heavy, it doesn't matter how familiar you are with the road you're traveling. It's incredibly disorienting. Gee, there might have been a giant cowboy that you totally missed! ;)

Great to hear that you had so many visitors today! I loved the picture of a working Afton Station. It captures a moment in history that can never be brought back. Sad, but what a wonderful picture to have, and how kind of that man to bring you the picture. What a treasure.

As for the guy saying that Obama is a Communist...good for you for speaking up! In the past few months, I have come to believe that it's up to each of us to speak up and say (politely, if possible, and it usually is) that their statements are incorrect. Too many think that it is acceptable to go around spouting such lies, and too few ever contradict them. I'm all for keeping the peace, and I don't like confrontation, but even I have my limits, and I don't think there's anything wrong with calling someone out on such false statements.

Glad you had a good Halloween, that you used up your candy, that you did not need to bath in tomato juice, and that it was a good day at Afton. It was a beautiful day here as well :o)

I've found that the best way to hack off a wingnut is to point out that the Sermon on the Mount is basically a socialist manifesto.

If you're afraid that will cause their heads to explode, you can always just give them an answer as intelligent as their accusation: "Yeah, but he's hot." For added effect, follow it up with your very best Sarah Palin wink.

Either way, you'll be telling the God's honest truth. ;)

That picture of the station is wonderful and knowing the story behind it makes it even more so -- by a bunch!