Well, not quite. But, this morning, I found myself singing:
Over the river
And through the fields
To ex-husband's house I go....
As you know, my ex is nice enough to fry a turkey for me every year at Thanksgiving. It was absolutely worth the drive (2 hours each way to where he lives) to pick it up this morning. It was a nice day for a drive on Route 66, which is 4/5th of the trip, and there was relatively no trafic. I stopped at the new Buffalo Ranch truck stop when I saw that the bison herd was up near the fence where they were very visible. I noticed a new baby bison in the herd, not close enough to photograph well, but I caught a picture anyway. 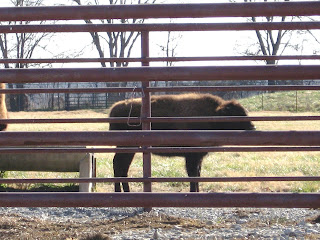 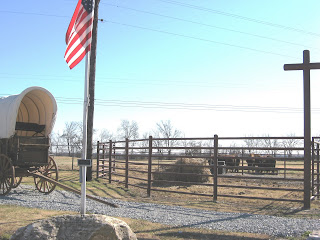 I stopped briefly at Afton Station to check the answering machine and see if anyone had left notes at the door. None of either. I can't believe I haven't been there since last weekend! Everything seemed fine and apparently untouched, meaning that nobody else opened up in my absence.

David was just about to remove my turkey from the fryer when I pulled in the driveway. He sets up the fryer outside in his driveway on a big piece of plastic. He's doing 7 turkeys this year, one for me, one for his family, and five to give to charities (or perhaps I should count myself among the charities?). While I was at his house, we called our daughter in Chicago who was home from work today and also busily cooking for tomorrow. She's going to her in-laws for the day, but will take most of the food (everything except the turkey).
I drove home, and as soon as I got here I carved the turkey and sealed it in pouches which will go in the oven tomorrow. I truly believe in doing everything in advance so that I have plenty of time to visit with my guests. And I do mean EVERYTHING! Tomorrow will be mainly warming the stuff I've made in the last few days. If that sounds evil, never fear. I always get compliments on what I serve, so apparently it works. I'm the queen of make-ahead! This year's turkey is the best ever -- juicy and flavorful, with lots and lots of meat. I picked the bones enough while carving it that I think I won't need any more food today. :-)
I doubt I'll blog tomorrow. I love to watch the Macy's Parade in the morning, and the guests will arrive around 1 p.m. HAPPY THANKSGIVING TO ALL!
Posted by Laurel at 4:16 PM

A Blessed Thanksgiving to you Laurel.

Take time today to give thanks to God for all of the Blessings He has given you.

How nice that he does the turkey for you. Hope you had a great Thanksgiving.