In 2004, I found myself chairman of the Tulsa International Route 66 Festival, a fancy name for the national Route 66 convention held each year in a different locale. The title of Chairman of the Board was fancy too, since I don't deserve a fraction of the credit that should be bestowed upon the hundreds of volunteers that made up the hard-working committee. However, as a relative newcomer to Tulsa, it was a great way to meet folks and get established in the community.

The Festival was a 5-day event, and one aspect of it was a gallery show put on by the University of Tulsa which was made up exclusively of items from my Route 66 postcard and memorabilia collection. I worked with the director of the School of Art, Teresa Valera, an amazing lady whom it was an honor to get to know. We hit it off very quickly because we're both big fans of KITSCH!
In a description of the exhibit which was displayed on a poster at the show, she attempted to explain the meaning of "kitsch". Here is a part of that description:
There is a mix of old and new items in the exhibition, from the original drive-in movie speaker to the Harley-Davidson motorcycle. This suggests that the spirit of Route 66 is still a vital presence in American culture, as it has been through history. During the Depression, hundreds of thousands of farm families, displaced by the Dust Bowl, made their way west across Route 66 to California, following what John Steinbeck called "The Mother Road" in his vivid portrait "The Grapes of Wrath". After World War II, many thousands more aspired for social and economic mobility by leaving the industrial East bound for good jobs in the suburban idyllic landscape of Southern California. Again, they followed Route 66, which came to be the agent of the demographic shift from the Rust Belt to the Sun Belt.
The question might arise: Is kitsch art? Well, it depends on your point of view. Just as diners and gas stations lined the road to form an interface between it and the American landscape behind, so Route 66 acts symbolically as a boundary between mainstream society and regional communities. It serves to emphasize the aesthetic, cultural, and ideological differences between a national and regional America. The souvenir seems to harden the boundaries between the seller and the consumer, between the artist and the critic, and between national and regional cultural perspectives. A traveler might think that such a souvenir is a product of popular culture, something kitschy, not a work of fine art, and more importantly, he/she might believe that it could never be both. Many artists, however, including some of our most famous ones -- Cindy Sherman, Jeff Koons, Alexis Smith, Pepin Osorio, and Haim Steinbach -- take kitsch seriously. Are the objects in this exhibit kitschy? Stand in the middle of Route 66 and look both ways. You decide. 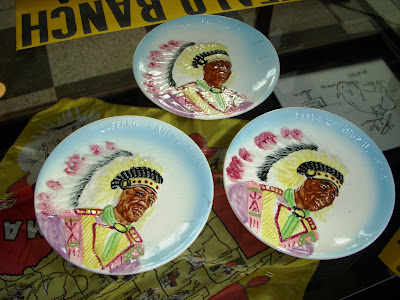 "Indian" kitsch from Buffalo Ranch. Not made by Native Americans, by the way.... 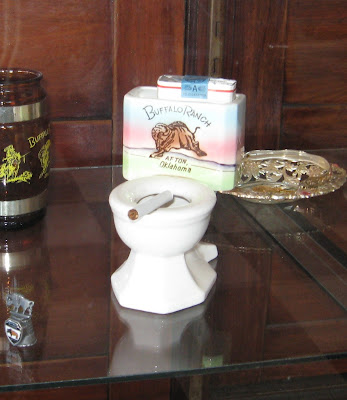 Could there be anything kitschier than this toilet ashtray from the 1950s?

The next two pictures are of my exhibit at the University of Tulsa -- June, 2004 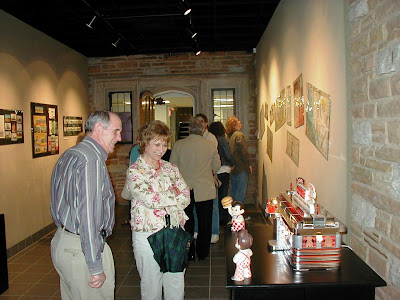 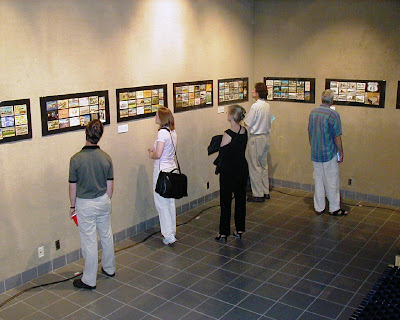 Trying to define kitsch is like trying to define googie signage. It's hard to put it into words, but you know it when you see it! Of course, that's also been said about obscenity...!

One of the best things about road trips is the fun stuff you find along the way. I suppose there are some that don't see it as art, but I believe it is an art form!