What to do when there's nothing to do

It snowed today! It wasn't a heavy snow, and it certainly didn't stick to the ground at all, yet it kept visitors away from Afton Station in droves! :-) Thank goodness, both of the Rons and Betty were there to keep me company, and we had a lot of laughs. I think the absence of travelers must make one giddy, because a few times we were all laughing hysterically at almost nothing. I did have one -- yes JUST ONE -- guest, a guy from just down the road who needed an excuse to get out of his mother-in-law's house for a little while after a long Thanksgiving weekend visit. He stayed for a while and looked at the cars. He then showed us pictures of the Barracuda he's restoring for his son who is a drag racer.

So, what DO you do when there's nothing to do? For one thing, we dressed Tripper for Christmas in a few things we found around the Station. 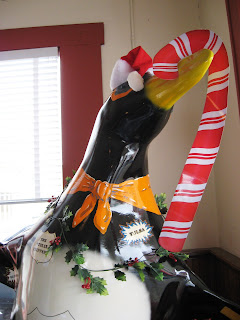 For another, Ron Jones brought his nicely restored and very patriotic 1956 Chevy for all of us to enjoy. 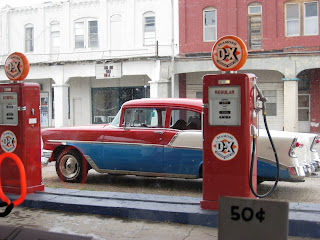 We made a fresh batch of popcorn. 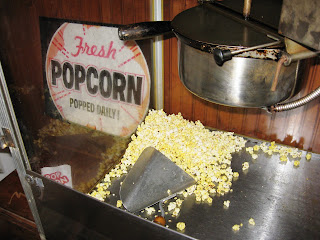 Ron McCoy wandered around and took some interesting photos. Here's one that's the reflection off of the front door. 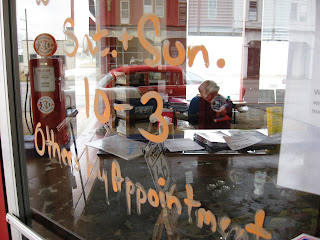 Then, when we were really desperate for entertainment, I volunteered to tear a phone book in half with my bare hands. Ummmm..... I didn't quite make it, but I think that those who were there to witness it would agree that I gave it a good try -- that is, if they were actually able to see me through their tears of laughter. I guess I used to be a lot younger and stronger (and maybe drunker) back in the old days when I could accomplish that feat. 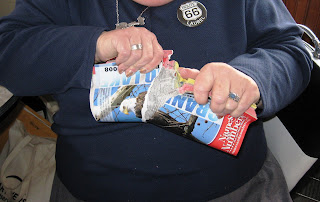 So, it was just another day of mixed boredom and hilarity at Afton Station. More to come in the future, you lucky readers! LOL!
Posted by Laurel at 5:02 PM

I just missed you by a couple of hours. I was through Afton this evening on my way home from visiting my family in Illinois.

Sounds as if a lot happened on a day in which nothing happened.

A phone book? Hahaha! It sounds like you all had a great time and plenty of laughs!