This is what it's all about!

What a unique and uplifting day we had at Afton Station today!   Ron M. and I started out having another slow morning, the kind when we wonder why we arrived so early.  But when people started coming in  the door, it made every moment of our bleary-eyed drive to Afton completely worthwhile.

Since I opened Afton Station, I have continued to call it a "visitors' center", despite the fact that most people seem to think of it as a car museum or a location for buying souvenirs and see some interesting memorabilia.  But my real purpose has always been to serve as a place to spread the good word about the charms of traveling Route 66.  Most of my visitors already know much of the history and geography of Route 66, but every  now and then some folks like our first couple today arrive knowing virtually nothing about the Mother Road and go out in a flurry of intense enthusiasm for the Road.  When that happens, I feel as though my job is done and I've fulfilled my purpose. 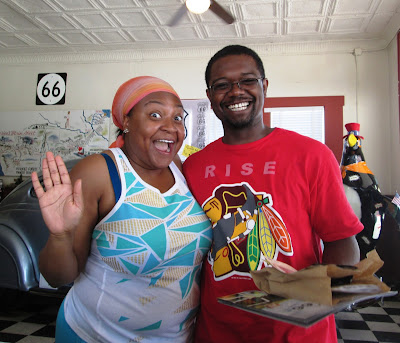 Enter this first couple from Chicago who stumbled into Afton Station when they accidentally got off the Interstate on their way home after a visit to Tulsa.  They had vaguely heard of Route 66 when they came in, but as Ron M. and I talked to them, we noticed that their smoldering interest was quickly turning to major fire, and by the time they left, they were sold on doing a lot more of the road.   They ended up buying some souvenirs to commemorate their visit and off they went, on -- you guessed it -- Route 66!   We told them they could get all the way to Chicago without going back on the evil Interstate, and I wouldn't be surprised if they took us up on the idea.

Second on our Enthusiasm Rating Scale (ERS) were these two music teachers from Sherman, Texas.  They came in completely energized by being on Route 66 and, frankly, I've rarely witnessed such enthusiasm as came from the gal on the left in this photo.   She was supercharged, and it was contageous.  What a way to brighten our day.   I look forward to more communications with these two! 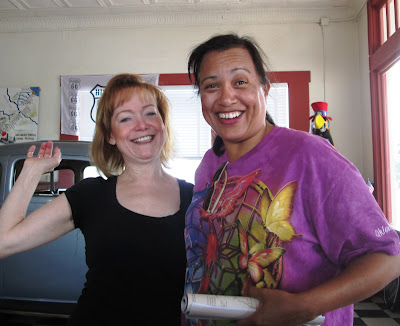 Among other visitors, all of whom were  unique in their own right, came from Edwardsville KS, Greenfield IN, and a family of four from Moore, OK.  In light of the recent devastation in Moore, we asked if the family had been affected.  Not directly, they said, although the destruction took place less than a half mile from their home, and they are still saddened when they drive through the area where others were less lucky.

My friend in Oregon put up a sign similar to this in her non-profit shop, and since I feel the same about the treatment of pets, I decided to print one up and put it on our front door.  So far, only one flamingo took us up on the offer to host our animal friends. (Click picture to read sign.) 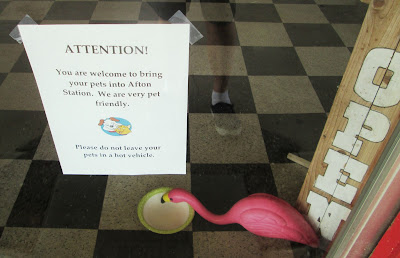 There was a sprinkling of rain today as I was driving in Tulsa to pick Ron up.   It's been a long time since we've had rain, and it came as a bit of a surprise to me.   I stopped long enough to take this sunrise photos.  Sunrises always seem more spectacular when seen through a tiny bit of precipitation. 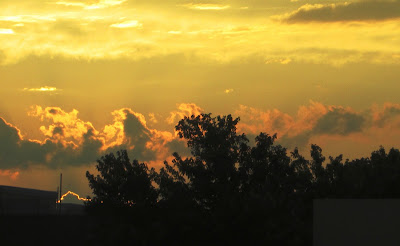