Morning -- nothing.   Ron M. and I sat there and wondered why we'd even bothered to drive to Afton Station this morning.   Then. . .about 90 minutes later. . .a glorious influx of visitors which, by the end of the day, totaled 51 (unless I missed a few in the crush). . . one of the best days we've ever had without hosting a large group.  At one point, I became confused as I tried to greet each person individually, and Ron was infinitely helpful by guiding everyone to the auto showrooms.  I hope I made note of everyone who visited, but I'm not absolutely sure.  Betty came around noon and helped out, too.  We had a ball, but, well. . . . whew!

During the morning the only excitement in town was the arrival of these two men in some sort of protective suits.  There  has been a rumor about a gigantic bee swarm in the building across the street, so we thought perhaps they had come to remove it.  But then it looked like they were sealing up the door of  the building, thus suggesting that their suits might be protection from asbestos.  We still don't know.  They left with buckets of. . . what?? 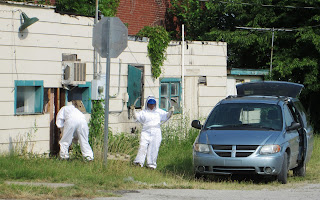 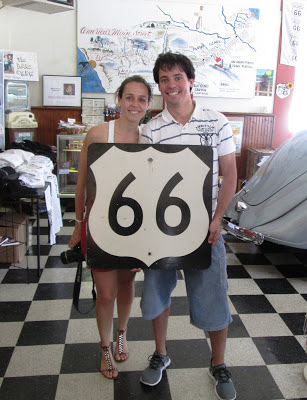 We enjoyed this couple from Bilbao, Spain (in the Basque country) so much. . . 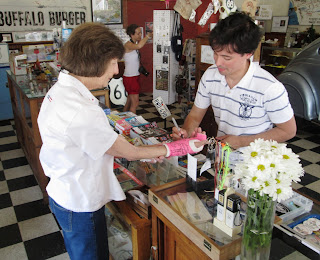 . . . that Betty asked them to do her the honor of signing her cast!   She only has to wear the thing for 12 more days, and she's very pleased about that. 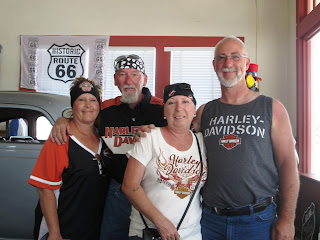 This foursome from Shawnee, OK was braving the very hot day on their Harleys.  They're veterans of motorcycle riding, having been on many long trips on their bikes. 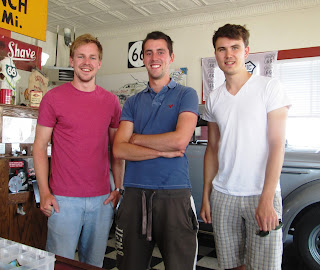 Jolly Old England was well-represented by these three gentlemen. . . 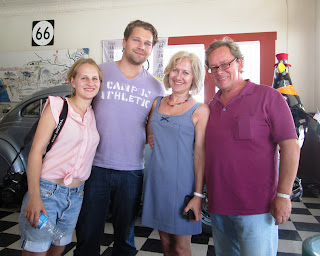 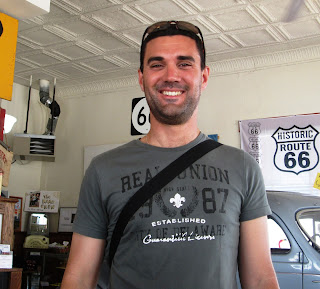 Nothing like a handsome Frenchman to brighten the day!   This one is from Paris, but is working in Wichita, KS at the moment.

Have you noticed a common thread in today's photos?    European men are mighty handsome!   Shame on me, but it's true.    Maybe I'm just delirious from the heat and the crowds.   G'night!
Posted by Laurel at 6:04 PM

Always happy people in your pictures. I love the daisies on the counter?

I always tell them to look happy so it will bring in more customers. Ha ha!

Betty brought me the daisies. Aren't they pretty?!