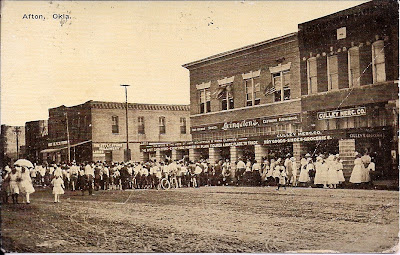 Here is Part 2 of the interesting memoir of the early days of Afton, Oklahoma as written by Ethel Williams Cunningham in 1979.

~ ~In 1907, Oklahoma became a state and Afton got their first public school just in time for me to start high school in 1911.  There were 5 members who graduated in 1915 --  the first graduating class to have completed 4  years and 16 units in the new building.  The names of the graduating class members were:  Irene Roseborough, Ailene Bowen, Fred Abney, Ralph Dawson, and myself, Ethel Williams.  Some of the subjects I had were English, Latin, Algebra, History, and Geometry.  I would have liked to have gone to college at the Indian Seminary in Tahlequah, but girls did not leave home much in those days, and money was very scarce anyway.

In December after I graduated from high school  I married Wilton Cunningham.  Soon the U.S. was in World War I.  I lived in San Antonio with my Army husband and small daughter, Ione.  After the war, we moved back to Afton and Wilton went back to work for the railroad.  The booming days of the railroad will be remembered by every early residents of Afton, but that is another story.   I will let my husband tell you about that. (That's the ONE thing he knows more about than I.) ha

Then came the days of the depression.  Men could not find work.  The government created the WPA to help.  Men worked 12 hours a day, 7 days a week.  Wilton made $45 a month on the railroad, and that was a good job then.

Since everyone worked hard and since we had little time for recreation, we probably enjoyed special events more than you young people do today.  For example, on the 4th of July, it was the custom for many years for Afton to have a carnival in the park.  There were many games -- horseshoe pitching, sack races, and hog-calling contests.  I can remember that one year a girl won the hog-calling contest.  I would tell you her name, but she is still living and I'm afraid that she can still yell!   There were also rides -- ferris wheel, marry-go-rounds, the whip, etc.  We were lucky to have 25 cents to spend, and after we spent it, we would usually walk around and watch  the others play bingo.  There was always a parade, a decorated platform and a political speaker.The 4th of July was a big event and we looked forward to it each year almost as much as to Christmas.  (Added later:  The hog caller's name was Minnie Frellick Lynch.) ~ ~
Posted by Laurel at 4:07 AM