Leaving is harder than arriving!

I had a heck of a time getting out of Afton Station this afternoon and back on Route 66 toward home.  People kept coming in the door, and I just hate to turn them away.   One of my suppliers, Greg Gazak, was there delivering merchandise, and I always enjoy his visits so I kept the place open until he left.  (Greg is one of the most reliable and affable folks I buy from, along with Kathy Anderson and a few others who are always on time and very fair).   Anyway,  Greg and I were trying to settle up when others were coming in to visit.   I finally left about 45 minutes late, but no big deal really.

I was alone today, so not many photos were taken since Ron M. is better about that than I am.  I only got photos of the people who visited from other countries, such as. . . 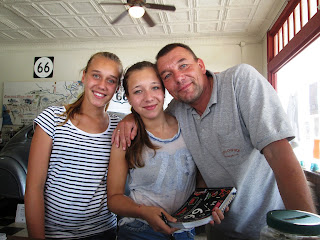 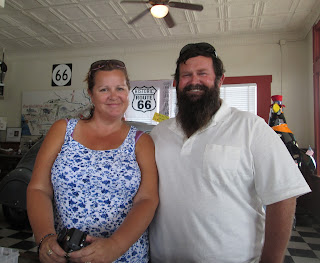 . . . this couple from Kununurra, Australia.

The fellow from San Jose, California lived in Afton for a few years in the 70s and just had to come back to have a look at the old stomping grounds.  The Normal, Illinois folks were the only motorcycle riders to visit today.  The couple from Pryor, Oklahoma has traveled 49 states in their 13-foot trailer.  Only Hawaii remains to be visited. The last visitors of the day, from Salem, Oregon, arrived in a beautifully restored '30s era Ford.  I was in such a rush that I didn't get a photo of it.  My bad!

David is back from vacation(s) and we met today to discuss the concert which will be held at the Station on Sunday.   We figured out how to move cars around and make indoor space available.  I'm getting excited about the concert and also about the eGroup annual breakfast that will be held in Joplin on Saturday morning as a part of the International Festival.  Such a great occasion for meeting and greeting old friends, most of whom only get together once a year.
Posted by Laurel at 5:45 PM