Ok, today wasn't exactly crowded, at least not like the last four or five days, but I was at Afton Station alone today so it felt very busy.   I met some of the most interesting people today!

The Tulsan has a Citroen truck, and was hoping to speak to David about owning one of the little French cars. The gentleman from Nashville was on his way (via Route 66, of course) to the annual Ford Falcon gathering in S. Tulsa this weekend.  His white Falcon looks exactly like the one my dad had!

This duo from Des Moines, Iowa are father and daughter traveling together.  They have been planning this trip for years and even bought (jointly) the white Corvette they're driving.   They, along with their spouses, also do a lot of Harley riding and really enjoy the smaller roads.   On this trip its just the two of them, and they're trying to hit every inch of Route 66. 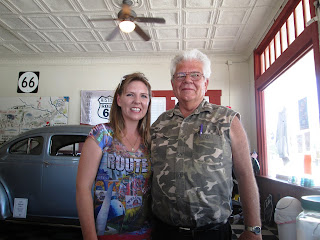 This is Michael Kechula, a writer and photographer who was kind enough to give me one of his books of short stories, I Never Kissed Judy Garland.   We had a good conversation about writing styles and cameras.  Michael has written a large number of award-winning works. 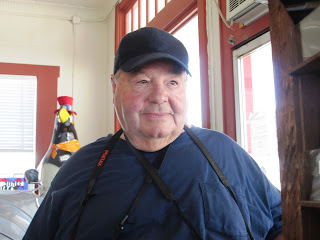 This young couple from Western Australia has already been in the States for about 5 weeks, with quite a few left to go.  They were driving a '67 Mustang which he partially built  himself, having ordered the parts in advance.   It wasn't quite done when the arrived here, so he had to finish it himself and they will send it back to Australia when they've completed their trip.  They got away before I could get a photo of their car. 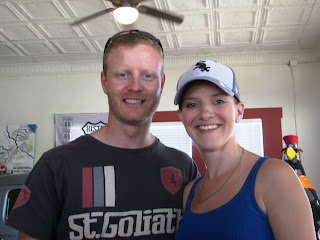 I did manage to get this photo of the Model A with a neat little trailer which was driven to Afton Station by a couple from Kansas City.   Very neat resto! 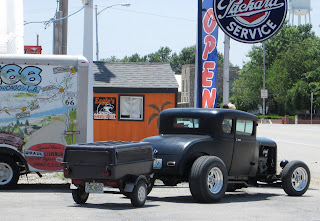 Dean "Crazy Legs" Walker stopped in for a bit, as did Marly.   I was not overwhelmingly busy so I was able to spend some quality time with both.
Posted by Laurel at 5:33 PM

Yes, Beth. I do love the days when my guests are interesting and varied, and when I actually have time to spend with each of them. So often the action is so frenetic that I can't devote much time to each one. People can be so interesting!

Cool Model A and trailer!
I had a co-worker who built a Model A hotrod. I kept encouraging him to cruise 66 in it, but he said it isn't comfortable enough to ride in for long.

Trevor -- I understand that. We had to modify the seat in our Model A because even my very skinny ex-husband wasn't comfortable in it.