~ ~ On Sunday afternoons we young folks would get together at someone's house, make candy and visit.  Sometimes we would get mad at the boys if they decided to race their horses instead of paying attention to us.  These Sunday afternoons were often the only recreation for young people as we had no cars and no time for other forms of recreation.  Also, often our parents would share their "Sunday" dinners and the men and women would visit.

Our church meant a lot to us. My mother, Rosa T. Williams, was a charter member of the First Baptist Church in 1902.  The women worked hard to  help buy things for the church.  I can remember that once a week I baked home-made cinnamon rolls to sell.  Sometimes I needed the money, but I always gave it to the church.  Also, we had a cow and I sold milk and cream. 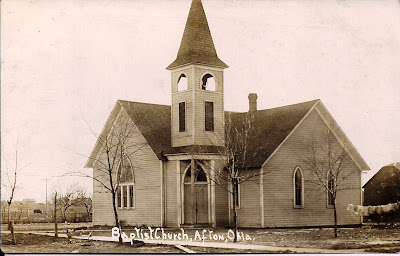 At the present time, September 1979, my husband and I are still living in Afton close to the school.  We have two daughters, both of whom have taught in the Afton Public Schools and who live close to us.  You may know them -- Mrs. Ione Dry and Mrs. Doris Kirk.

Yes, many changes have been made in Afton and in the world since I was a girl living in Afton in the early 1900s.  Although we had no cars, no television sets, no jet planes, and little money, we learned the value of work and the importance of our country, our God, and our family. ~ ~

Thanks for posting these Laurel. I always enjoy reading first hand accounts about life in the recent past. That's a cute little church...is it still standing?

Laurel, do you know, did Wilton Cunningham ever write about the railroad boom days in Afton? Mrs. C said it was the subject he knew well and the only one he knew better than she. What a lively lady she must have been.