I took the day off from Afton today.  I just needed some time to myself.  I was up late last night because Ron M., another friend, and I attended the Terry Fator show at the Hard Rock Casino.  (Don't ever let anyone tell you that Terry Fator is a 2nd rate entertainer.  He was nothing short of wonderful!) 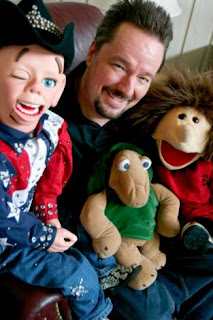 I was going to take a little road trip today (because I don't drive enough during the week?  LOL) but it was raining cats, dogs, and turtles for the majority of the morning so I just used the day to catch up with a lot of odds and ends at home.  I also made my once-a-year trip to Wal Mart.  I'm of the opinion that once a year is once too often.  Ugh!

I had written to Jim Ross about the problem with the gravel on the 9-foot-highway.  (Read my previous post.)  He has infinite expertise when it comes to Route 66 in Oklahoma, having written several of the most used and trusted state guide books, and he also has a history of working for the Oklahoma state highway department. I asked him what he thought could be done about it, and here is his reply:


What to do about that road has been discussed off and on over the years, including talks with Melvena at the SHPO [State Historic Preservation Office]. The roadbed is on the NRHP [National Register of Historic Places], however that only means it cannot be removed using federal funds. The county (who has jurisdiction there) may or may not use federal funding for some of its projects, but that is another issue. There is nothing that stops them from applying the gravel. Here’s the problem: the road has to be available for the local farmers and landowners who live or work along its right of way. Since it is too narrow to handle two-way traffic, the gravel is used to make it wide enough for vehicles to pass each other. There has not been a practical way found (yet) to divert traffic onto a separate pathway. The gravel on top of the roadway probably does not damage it to any extent; though it can’t be good, either. I agree that it looks bad and ruins the experience of the tourists who want to see it. The only solution I can think of would be to add asphalt shoulders to the roadway to make it wide enough for two vehicles. Not the best solution, and one that would cost the county money they probably don’t have (although gravel ain’t cheap, either). I think it would definitely be worth getting an appointment with Mr. Earls and have a discussion about a long-term solution instead of slowing destroying it with repeated applications of gravel. After all, a lot of folks come through there just to see it, and that means economic impact for the county.
You are doing a great service to the road by caring enough to get involved. Don’t give up!

If I weren't so shy when it comes to confrontation, I'd storm the county meetings and give them a piece of my mind, but I just don't have it in me to do that.  What I need, I guess, is an advocate.  I don't know how much credibility I'd have, either, since I live 85 miles away from the 9-foot-highway and am considered an "outsider" by most folks in Afton.   Even so, I plan to mull over this problem and try to solve it somehow, probably by sending Mr. Earls a letter. 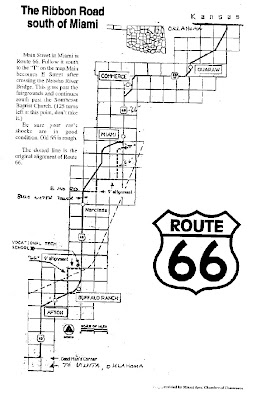 I was wondering just this week about the gravel situation on the Scotch/Ribbon/Sidewalk (take your pick) Highway. It's really a shame there isn't money to build a 2 lane farm road for the people who live in that area to use, freeing up one of the last stretches of 9' road on Historic 66 to be the unaltered tourist attraction it should be. How many miles would a farm road need to be to take local traffic off 66?

I'd like to rephrase something in my comment above. I believe the Ribbon Highway should remain unaltered because it is important as an unique historical artifact which just happens to also be a tourist attraction.