I was given this memoir  of Afton written by Ethel Williams Cunningham on September 26, 1979.   Ethel was born in 1897, before Oklahoma was a state, and she was 82 years old when she wrote it.   It's somewhat long, so I plan to post it in three parts.   I found it very interesting, not only as a history of Afton, but also as a reminder of so much of it which holds true for other small towns along Route 66.

~ ~I have been asked by the school librarian to tell you a little of what I can remember of the early days of Afton.  My name is Ethel Cunningham.   Today is my birthday.  I am 82 years old. I was born here in Afton in Indian Territory days, September 26, 1897.  I was the only child of S. C. Williams and Rosa T. Montgomery Williams.   My great great grandmother traveled the Trail of Tears when she was a little girl.  My grandmother often told me of the hardships and suffering they encountered when they were moved from their nice homes and plantations to Indian Territory.

My father was a carpenter who worked  hard for a living.  The 40-hour week was unheard of then.  When my mother and dad decided to get married they had to wait for several months for "Uncle Jeremiah Hubbard", a missionary preacher among the Indians to make his circuit and get to Afton.  He would then often have several marriages to perform.

Wherever you found early settlements, you would also find that the people would find some way to provide for the education of their children.  Some of my older friends attended an Indian Academy and subscription schools.  One of my earliest remembrances was the Thompson School.  My husband, Wilton Cunningham, also attended this school.

Afton began to grow during Indian Territory days.  When I was a girl in the early 1900s, I can remember that Afton had two banks (Farmers State and Afton State), two drugstores (Afton Drug and Beaty Drug), 2 livery stables, two hotels (Palmer and Dawson), 3 dry goods stores (Livingstons, Abneys, and Reeds), 4 doctors (Harper, Dawson, Rutledge, Troutt), one dentist (Dr. Scott), a milling company which made flour and meal daily, a meat market, an ice wagon whose wagon and horse made daily deliveries, a shoe shop (Barbee's), a second-hand store (Morris'), a restaurant (Bulosky), a newspaper (Afton Climax), a small bakery for a while.  There may have been others that I can't remember.~ ~

So, that's Part 1.   Even those who have never been to Afton but who read this blog know that none of the businesses listed above still exist except one bank.  The milling company is being razed at this very moment.  To the best of my knowledge, there are no doctors or dentists remaining in Afton.  I will continue this story when I have time later in this week or next.  I hope you find it interesting. 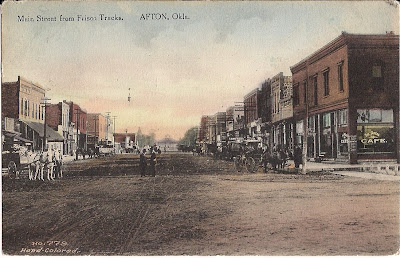 What a treat, Laurel. Glad you're sharing. Is the introduction about receiving Mrs. Cunningham's account 1979 written by you?!

Ethel was my great grandmother. Thanks for the story!