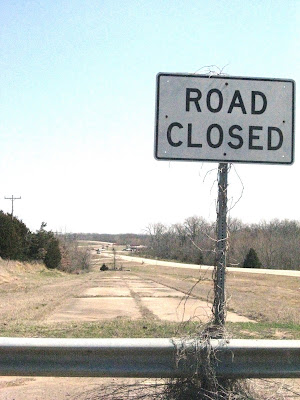 Ramblin' fever,
The kind that can't be measured by degrees.
Ramblin' fever,
There ain't no kind of cure for my disease.
-- Merle Haggard
Sometimes I need to go somewhere where I've never been before. Around here, I have to use my imagination and pretend I've never been there before, because the truth is I've been just about everywhere. Forget about Route 66 between Tulsa and Afton. I have a good imagination, but it's not that good! I've got that one memorized down to the last branch on the last tree. But I don't get out west of Tulsa very much these days, so this afternoon I took a short "westward ho!" trip. I only got as far as Depew, but it just felt good to be out on a beautiful day on Route 66, in slightly less familiar territory.
I went out specifically to stop and gaze at remnants of the old Route 66 around the Depew area. There are some beauties out there. They're not driveable, but they're pretty photogenic when the haze doesn't get in the way like it did today. Nevertheless, you get the general idea. 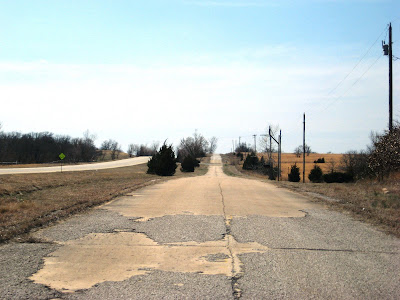 Could anything be more indicative of a closed road than someone making it into a basketball court? Route 66 a basketball court! Shameful!! :-) Anyway, these old alignments run right up next to the later alignment of Route 66 and some people have to cross them to get into their driveways or farm roads. Since the tiny segment dead-ends just beyond the photo, might as well put the pavement to good use. 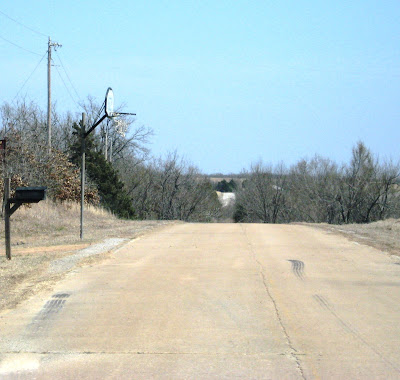 On the way back, I took a quick spin through Depew, another sad little Route 66 town. As you can see, there was not much commerce going on in downtown Depew this afternoon. I paused to have myself a nice cleansing cry in the middle of town. I think I've cried in just about every little Route 66 town I've been in. It has to do with what's been lost, and what used to be. I can't help it. It's my own personal Trail of Tears. 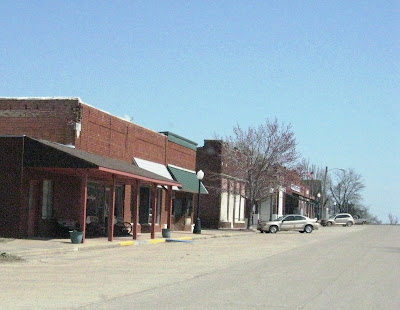 I've driven through Depew a couple of times. A charming little town, but, they just can't get tourists to come in.

There's a convenience store just west of Kellyville. It's alleged to be haunted by the spirit of someone who died crossing the road there.

Trevor -- I've always thought they needed a bigger sign on Route 66 where you turn up the hill to get to Depew. Maybe, like Afton, they just don't want people there. It doesn't make much sense to me.

I've gotten gas at that convenience store, but had never heard about the haunting! Interesting.

I loved the pictures...gorgeous shots of abandoned roadway. A basketball court? This Hoosier says that maybe that's an okay thing. ;) Hugs, Beth

Depew wants the visitors; what it lacks is money. Downtown is healthier than it appears at first glance (a lot of the businesses close on weekends, so unless you're at Spangler's, you probably won't notice much going on), but there just isn't any cash floating around for signage. The Association painted shields on the road leading into town, but we used the wrong kind of paint, and it wore off almost immediately. The little signs pointing the way into town were made by yours truly; the city eagerly put them up as soon as they were finished, but they looked much bigger while I was working on them. From a distance, they're so small you probably wouldn't see them unless you were looking for them. If somebody wanted to donate bigger signs, I'm sure the city would love to have them.