This morning, it was off with the talk radio and on with the classic country. It was just that kind of day. You've got to understand that the same 80 miles, even if it is old Route 66, can start to get a little monotonous morning after morning. Although I'm not a great music lover, the twangy background tunes transport me back a bit -- to when I was a kid in the back seat of my parents' car, seeing all of this for the first time. I can make my mind go there if I'm in the right mood. I can forget the politics of Route 66 (and yes, there certainly is some), and the problems of Route 66 (there are plenty), and just get lost in the etherealness of the experience, even if it's my 500th trip down the same piece of pavement.

It must have been Double Entendre Day on the classic country station I was listening to. On the play list this morning were "Big Balls of Cowtown" (Mel Tillis) and "Don't Touch My Willie" (Kevin Fowler). LOL!! I also enjoyed one called "King of Barstool Mountain" (Mo Bandy).
____________

I had an interesting day today at Afton Station. It was quite busy, with 14 visitors, many of whom were on Spring Break. I guess I can expect the vacation week to bring quite a few visitors -- at least I hope so. Ron "Tattoo Man" Jones helped me today, and Dean "Crazy Legs" Walker stopped in for a while too, meaning I had both of Route 66's "characters" with me at one time. Some of the visitors who dropped in while they were there were treated to Tattoo's tattoos and Dean's ability to turn his feet completely backwards. Here they are! Note Dean's feet. . . 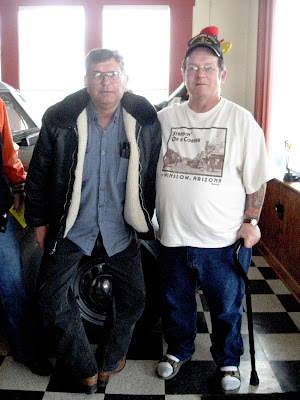 Dean brought along the brochure advertising the Tri State Adventure (International Route 66 Festival) coming up this June in the Route 66 triangle formed by OK, KS, and MO. I'll post details here tomorrow.
Our first visitors were Ron and Colleen Yockey, longtime Route 66 fans who used to live in Afton but moved to Scranton, PA recently. They came back for a visit, and it was so nice to see them. Ron is still still fueling his truck with waste cooking oil which he collects from restaurants, etc., and which I think is just very cool. He's also a biker and a world-class barbecuer. Other visitors included a family of four from Pottsboro, TX who had an adorable 3-month-old baby named Ellie. Ellie must be one of the youngest visitors we've had at the Station, and definitely one of the cutest. 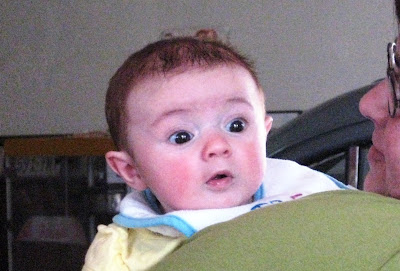 Another couple, from Columbia, MO arrived in a sleek Airstream, heading west. Then, at the same time, a couple from Claremore, OK and a man traveling solo from Eureka, CA arrived, and both owned Packards which they were planning to restore. The struck up a conversation and I wished David had been there to render some Packard advice. 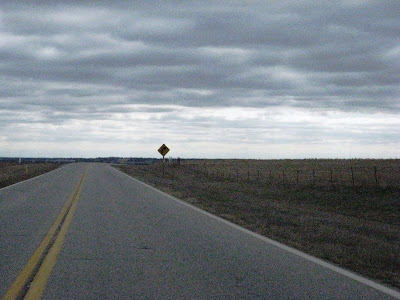 Low-hanging clouds shrouded my drive home to Tulsa. It was eerily pretty.
Posted by Laurel at 5:48 PM