It's starting to feel good at Afton Station. People are coming in the door fairly regularly, and during my "down" time I'm so busy writing that the time flies. I'm glad the writing bug hit now, before things get really busy. I'm continuing a little piece I started about 5 years ago, and which may never be finished.

Today, my writing time was interspersed among visits from 9 people. The first couple, from Port Orange, FL were members of the American Volkssport Association (American Volkssport Association Walking Clubs and Walking Volksmarch Events), a group of folks who go on 10K walks in cities all over the country. What an interesting idea! They are doing walks in five states along this year, including the Route 66 cities of Oklahoma City, Tulsa, Riverton/Baxter KS, and Joplin, MO. They've already walked in over 30 states.
A man from Goodman, MO hauling the partial body of a Model A, stopped by just out of curiosity. He was taking his treasure home to begin restoration. A man from Miami, OK stopped by looking for resto information. A family of four from Keller, TX are on a Route 66 trip covering OK and TX. The kids were quite taken with the penny squasher, and the adults were happy to find me open, since I was their first stop on the trip.
Finally, my guest of honor was my first foreign visitor of the season. This handsome gentleman said he was from Norway, but he spoke excellent English, so I asked him if he'd spent some time in the U.S. It was then that he confessed that he'd been an exchange student at Afton High School in the '80s, and since he was in the States on a business trip, he decided to come to Afton to do a little reminiscing. He was in some shock at the changes (not good ones) that have occurred since he was here. I was sorry that Betty wasn't around, because he knew her when he was a student. Hopefully, he'll be able to come back on Thursday. 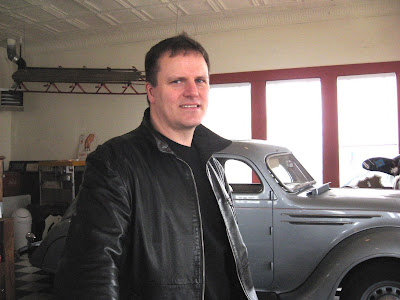 Spring must be on the way. The local boys were spotted dragging a boat down the street today, heading for little Horse Creek, I guess. 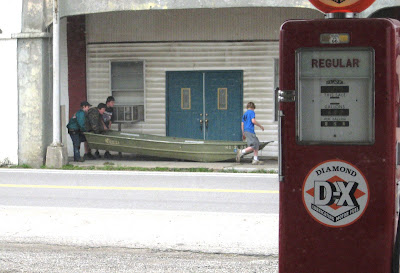 Trevor, my very faithful blog follower and fellow Route 66 fan, popped in with his family yesterday on their way to vacation in Branson, MO. I'm so sorry I missed them. Apparently, Marly was there to let them in, although I had no idea he planned to work yesterday. Sometimes things just work out right, I guess.
__________
I went back to Stoney Boyz for breakfast this morning. Why do I love it so? Well, the eggs are good, the biscuits are great, all the other tables are made up of cowboys and working guys with beards and yet they don't stare at me like I have three heads because I'm both a stranger and a "girl", the banter centers around local gossip, dogs, and even some celebrity stuff (Did'ja hear Charlie Sheen didn't get jail time?), the "N" in the big sign outside is backwards, the music is country and, thankfully, muted, and the waitress' name is Stormy. So, what's not to like?
___________
This pony truss bridge in Chelsea is scheduled for refurbishment, according to Frank from the Chelsea Motor Inn, which is just a few yards down the road from it. I thought I'd better snap a picture, just in case they do something uncool with it. 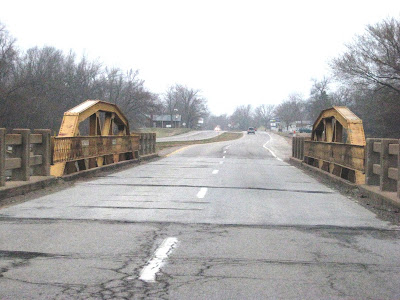 A new study by Portfolio.com named Tulsa the 8th best place in the U.S. for young professionals. It calls Tulsa a "true bargain", with "a strong growth rate, moderate cost of living, and a substantial pool of young adults with jobs and college degrees". Tulsa has the third lowest unemployment rate in the country. Oklahoma City came in 6th. Yaaaay, Oklahoma!
Posted by Laurel at 5:38 PM