I'm sorry to say there were no winners in my "What Is It?" contest. Actually, there were very few guesses, if you must know. Trevor recognized the rubber snakes. Nancy said "It looks like a mirror showcasing someone's very highly developed talent with glass." Both got about half of it right. There were a few others who gave up. Someone suggested it was a portable toilet. Very wrong, but funny! OK, here's the story:


A week or so ago, when Dean "Crazy Legs" Walker was visiting, there was a conversation about what could be found at old Route 66 "tourist traps", things that were fun and silly but, like the tourist traps themselves, no longer exist. Someone mentioned the old Snakes in a Barrel trick, wherein a closed barrel bore a sign saying "Snakes! Open With Care! Rattlers Inside!" or something to that effect. Dean was listening, and yesterday he brought me a completely hand-crafted box, complete with a light on a refrigerator switch that makes it turn on when the lid is lifted, and a mirror in the bottom upon which he glued several rubber snakes and baby rattles (rattles/rattlers... get it?) He spent a lot of time making the box and it's really cool. The person who dares to lift the lid will not only see the snakes, but will also see his/her own reflection coming up from the bottom of the box. Today, I made an appropriate sign for the box, which I'll photograph tomorrow. Meanwhile, here's Crazy Legs being frightened by his own creation. 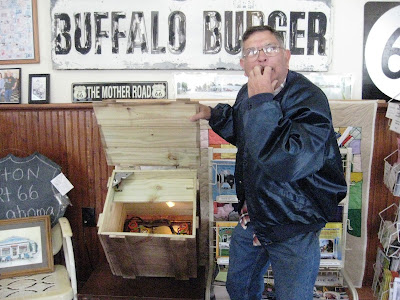 Now, how could you all have missed identifying this obvious contraption? Ha ha ha!

The Oklahoma Route 66 Museum has a box labeled "Baby Rattlers". When one opens it, baby toy rattles are in it.