Some of you may think that I have finally succumbed to scraping the bottom of the barrel after you see this post. But really, it's not true. Ok, it IS more photos of the backs of buildings, but I'm not taking the pictures just to fill up blog space. As I said earlier this week, I've always been interested in and fascinated by back alleys in small towns. In fact, I remembered that even when I was a kid I was always exploring what was behind buildings. This was especially so when it came to motels. As a child, when traveling with my parents I would often take a walk out behind the motel just to see what was back there. Sometimes there were cows, and sometimes there were corn fields. Sometimes there was just litter and trash. Once, in Virginia, our motel backed up to a small mountain/large hill, and as I was exploring what was behind the building, a small explosion up on the mountain made me almost jump out of my socks and flee back to my parents. It turns out that they were doing some blasting for a mining operation up there.

Today, I'm showing you more back alleys because 1) I had time to take some photos on my way to Afton this morning, and 2) it was a very uneventful day at Afton Station today, so I don't have that much to talk about.
We had only two visitors, both from Collinsville, Oklahoma. I think the lack of visitors (after having a record 18 on Tuesday) had to do with the fact that David had his huge, 44-foot long motorhome out for a spring cleaning in the driveway, thus blocking almost the entire view of the Station from Route 66. It was a nice day, however. Marly was there helping David, and it's the first time he's been around for almost two months, so it was nice to see him. Tattoo Man dropped in for a little while to have me take a better picture of his new Waldmire tattoo, by request of Jim Conkle of the Route 66 Pulse, who wants to use the photo in the next issue. Jim himself called me this morning from his home in California and we had a great chat. The next issue is almost done and he'll be delivering it in person in a couple of weeks.
OK, here we go with the photos of back alleys! 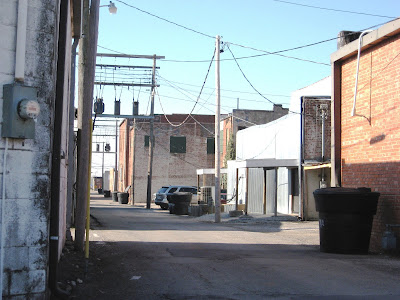 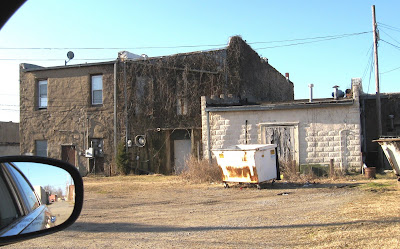 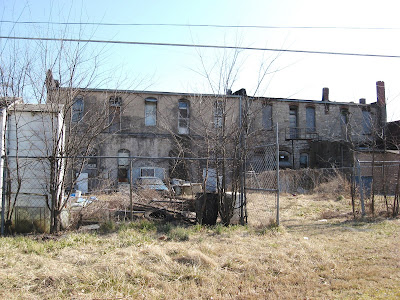 Afton, OK -- Palmer Hotel block from the rear
Posted by Laurel at 5:50 PM