Two, two, two posts in one!

My friend Lauren from Kentucky came for a visit. She asked if we could take a little trip up to the TallGrass Prairie in Northern Oklahoma, and I READILY said yes! It's my favorite place on earth you know, and one of my favorite things to do is to show it off to people who've never been there before. It was a dreary, drippy day, but that really didn't matter. Off we went. Once we got to the TallGrass itself, I was worried because we weren't seeing any of the 2,500 bison that roam there. But after driving a few miles into the prairie, we came across a HUGE herd, probably the most I've seen in one place at one time. It was quite spectacular. There were probably 500 head or more in one place. And of course a few were in the road daring us to try to pass. They finally sauntered across so we could continue on the path. Fantastic! Here are a couple of pictures, which aren't great due to the non-photogenic weather. 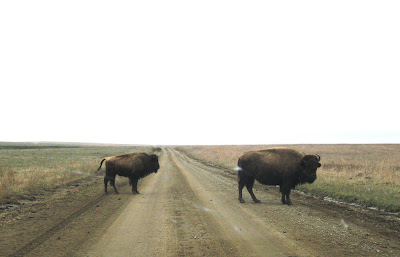 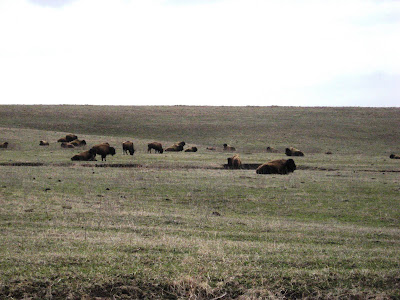 When Lauren and I returned to Tulsa, we had a great dinner at Local Table. It turned out to be a very nice day.

Now for today at Afton Station, which I'm aware is why most of you tune in to my blog. Ron M. and I drove up in a pretty severe rainstorm and we observed a lot of side-of-the-road flooding. When we arrived in Afton, we found some flooding in David's work rooms, so we picked stuff up off the floor but didn't do much else, since David said he'd be there tomorrow to mop it out, and besides, it was still coming in even as were leaving in the afternoon.

The morning was pretty uneventful, with no visitors. I'm not surprised, considering the weather. Ron and I did some reading, then we got both Ron and Tripper ready for the upcoming Easter holiday. I guess you'll be able to tell that we were pretty darn bored! 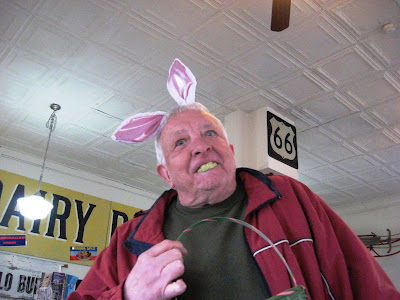 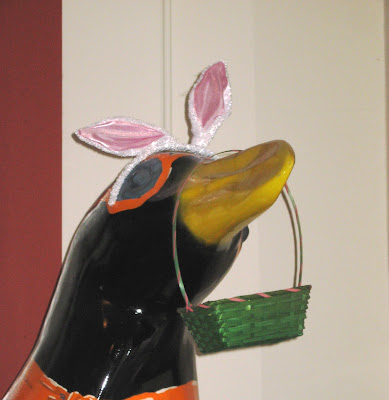 In the afternoon however, things picked up. Betty arrived, and shortly thereafter Jim Conkle, head of the Route 66 Alliance, arrived. I was very surprised, considering I'd just seen him at lunch on Monday, and he had driven all the way up to Chicago and back since then, delivering the Route 66 Pulse all the way. But it's alway fun to see Jim, and he caught us up with what's going on along the Route, then had to leave to head back to California. (Gordo, he bought some of your postcards!) He and Betty had never met before, so we made the introductions. Here they are. 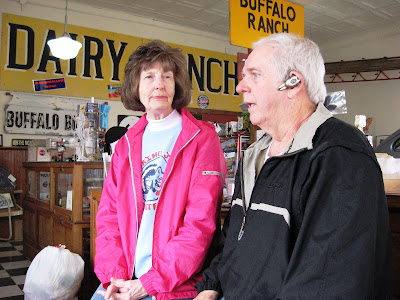 Just as we were leaving, a couple from Chicago, IL came in. They have a month to complete a full Route 66 tour, so they were just getting started but they have the right guide books, so they'll do just fine.

It's been a busy week for me so far. Time for my life to chill out a little bit, and yet I'm hoping for a VERY busy weekend at Afton Station.
Posted by Laurel at 5:28 PM