I'm pumped! Although it was cloudy and cold, today it felt like SPRING inside Afton Station. Why? Because I had EIGHTEEN visitors! Yes, it felt just like a warm spring day, with visitors coming in the door almost constantly, and it's a record one-day visitor count for the month of March. I really don't know if it was just a fluke or whether this will keep happening and the number of travelers will continue to increase going forward, but I like it!

It started early with two gentlemen from Claremore. We had a lot to talk about since I'd just had breakfast at that new place, Country Boyz, in Claremore this morning and we discussed eateries and other sites around their town. (Incidentally, I liked Country Boyz. It was clean, well lighted, and the waitress couldn't have been friendlier. I had eggs, which were done just right. The sausages were virtually grease-free. The only problem was that I was the only person there. That doesn't usually bode well for a new restaurant.) 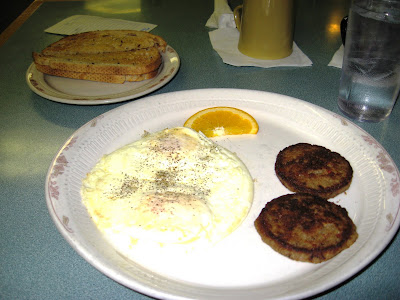 Anyway, back to my visitors. . . There was a short lull, but that was fine because Betty was there and we always have plenty to gab about. Shortly after she left, the floodgates opened. The afternoon guest roster included folks from Dallas TX, Galena KS, Wyanodot OK, Vinita OK, Big Cabin OK, Tulsa OK, and Riverton, KS. Lilly, a lovely little half blind dachshund from Dallas, was very well behaved while her people browsed in the shop. Folks from Vinita and Tulsa were coming from a funeral for a friend's 13-year-old daughter. Very sad. The Galena, KS folks were head of volunteers at the Galena Mining Museum, which is also on Route 66 on that small, 14-mile stretch of the Mother Road that cuts off the corner of Kansas. They took some of my brochures to hand out there. Everyone was especially chatty today, and I spent the entire day talking. Additionally, people were spending money today. I sold several books and a few other items. Nothing boring whatsoever about this happy Tuesday! 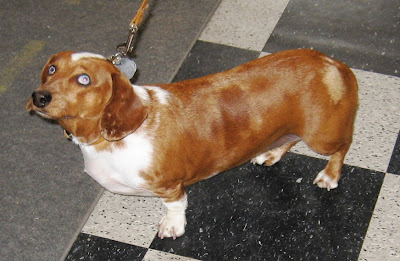 I had a few other things to talk about today, but I think I'll save them for tomorrow. I'm on excitement overload and I need to regroup. Oh, except this. . . Three Army tanks went past today, on truck beds. I managed to snap a photo of one of them. 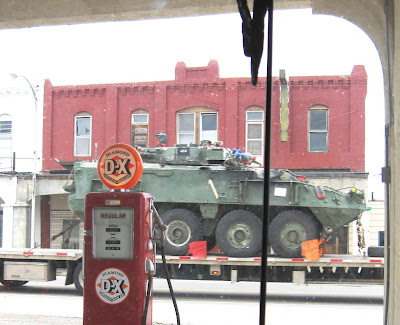 WooHoo, spring is in the air and I hope that means good things for you. That breakfast looks awesome.