As I sit here at Afton Station on a beautiful mild sunny morning, about 20 minutes before official opening time, I'm anticipating a good day. I just have a feeling. I noticed that Marly was here yesterday and logged six visitors into the book. Three were from Kansas, but there's no mention of the origins of the other three. Here's old Route 66 this morning (known as Route 60 here, as you can see.) Clear skies ahead! 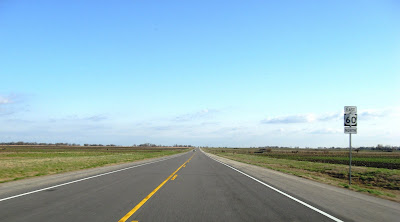 I was listening to someone on NPR this morning who made the remark that "having a blog holds you accountable". I'm not so sure that "accountable" is the right word, however blogging does make me feel kind of "responsible". I'm not really sure what I feel responsible for, though. Let's face it, a blog like this one is 90% self-gratification and 10% entertainment for others. My mission is to make it 100% entertaining to all the creatures on Earth, but I'm realistic enough to know that my readership will always be 1) Route 66 enthusiasts, 2) personal friends, and 3) voyeurs who just enjoy finding out about the life of someone they don't even know. I confess to being an example of both 1) and 3) myself. I'm fascinated by knowing how others live, even if I've never laid eyes on them. It always makes me wish I knew them as well as they feel they know me. There are plenty of people who don't want to be known, who guard their privacy. I'm simply not one of them.
______________

Well, I had 14 visitors today! Yes, it's starting to feel right! My first visitors were two young couples from Atoka, OK who decided to spend the weekend seeing every inch of Oklahoma Route 66. They bought guide books and other merchandise. The next folks, from Lewiston, TX, also bought several guidebooks for their trek on Route 66 to Arizona, then south to Mesa, AZ. They were a deaf couple accompanied by an extremely cute Service Dog, a schnauzer named Toby. They demonstrated how Toby reacts when one of them shouts for help. I wouldn't mind having a Toby in my life! Here he is. . . 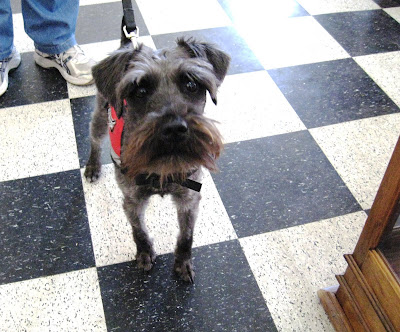 I had one of those fantastic surprise moments when Glenn and Janet, old friends from my days on the Prodigy postcard bulletin boards, walked in. I haven't seen them for years! They were on their way back from the west to their home in Canfield, OH and decided to find me in Afton. I was so grateful that they could stay long enough to spend some time so we could catch up with one another as well as exchange info about others who were in our postcard collectors' group. Here they are. . . 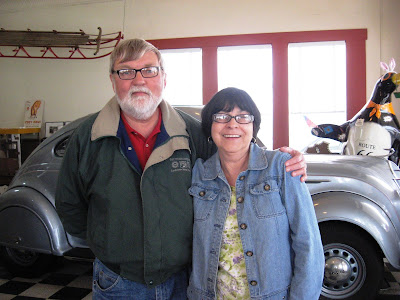 A couple from Gentry, AR, representing the Arkansas Miata Club stopped by. They're an advance posse, blazing the trail for the Miata Club's cruise which is coming on April 17. The club visited Afton Station last year, and they intend to visit this year as well. They were just checking to make sure we still want them. Of course we do!!!!!

I had dinner with Brad and LaSandra Nickson from the Oklahoma Route 66 Assn. last night and they managed to round up a couple more bundles of the Oklahoma Trip Guide for me. Good thing, since I was down to just a few and this year's edition won't be out for a little while.
____________

Gordon has been keeping me up to date on his trek across Route 66 selling his postcards. Sales have been good and he's met lots of nice folks. I know his postcards are definitely selling well at Afton Station. Way to go, Gordo!
Posted by Laurel at 5:22 PM