A visit from the Bronte sisters

What a cloudy and gloomy day! I started out the day bummed by something I read in the newspaper (which I won't go into now), but with great good luck my mood was lifted by visits from my first guests at Afton Station. 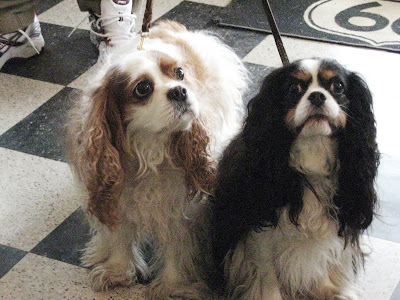 Charlotte and Emily, accompanied by their people, arrived soon after I did. Charlotte and Emily are a gorgeous pair of King Charles spaniels, owned by folks from Plymouth, MI who were headed to California via Route 66. The next (and last) visitors were a husband and wife from N. Mankota, MN who are going all the way from Chicago to L.A. in their red vintage Corvette. Slick! They all left me jealous and ready to stow away in their vehicles.

Mike Pendleton stopped by with more news about the 2010 Festival. When I get more information, I'll start talking about it here. Betty W. came later, and we spent the afternoon chatting. Thanks to Betty for helping me close up today.
__________ 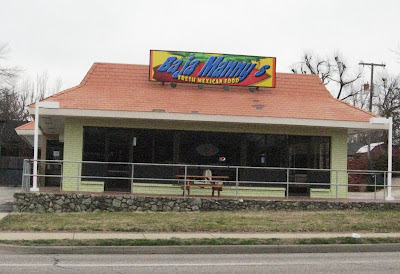 I got to Afton a little late today because I had to pick up something for David in Tulsa before I left. I spent the time waiting for the place to open by cruising a little of 11th St. (old Route 66). I found this new Mexican restaurant in an old fast food place (I think it was a Wendy's, but I can't really remember). Later, I saw an article about it in the Tulsa World. It hasn't been open long, but got a pretty good review in the paper. It's not much to look at, though. 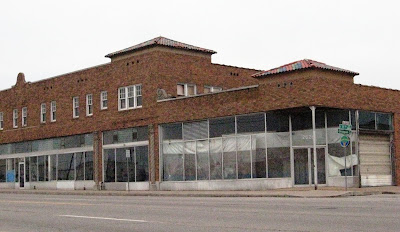 I've always liked this building, and I believe I wrote about it once before. It's the Max Campbell Bldg. on 11th St. and it's being restored. It used to be a hotel (and a few other things thereafter) but hasn't been used for some time. It will be returned to it's former hotel status, and will be called the Campbell Hotel. Since it's been quite a long time since a new lodging place has opened on Route 66 in Tulsa, this is a welcome development.
Posted by Laurel at 5:35 PM