I was given a gift today. Here's a picture of it. I'm not going to give you any details until I ask you to guess what it's all about. No hints. Guesses will be received either here as a Comment to this blog, or to my email address at LaurelRK66@aol.com. More about this tomorrow. Heh heh heh! 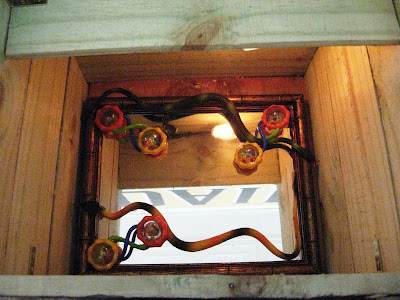 Meanwhile, I'm happy to report that it was another good day at Afton Station. Ron M. was with me, and our very first visitors were a very attractive family of three from Livornia, Italy. That's near Florence. They had come all the way from Chicago without a guidebook or a map! The husband's command of the English language was ok, but he certainly wasn't fluent. He confessed that they've been lost most of the time, and had only explored the bigger cities such as Chicago and St. Louis thus far because they didn't realize there was anything to see between them. They didn't even know guidebooks existed, so I introduced them to the EZ66 Guide and they bought one immediately. They were quite grateful for the little bit of help we could provide. That's what it's all about, isn't it? I feel sure they'll see a lot more on their Route 66 trip to Santa Monica now that they have a frame of reference. Their little boy, Gregorio, was fascinated by the new squashed penny necklaces I've been making, so they bought two of them for him. 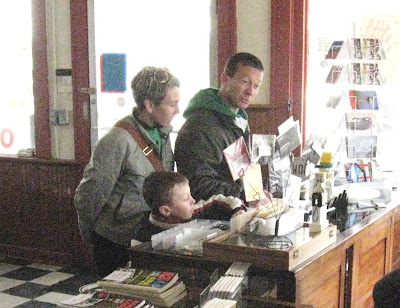 We also had visits from a trucker from Texas and a family of three from Miami who were just roaming around for the day and remembered that they'd seen Afton Station before and wanted to see what it's all about.

We were surprised to see Tattoo Man and his lovely wife Roz drive up! They had been on a last-minute weekend trip to Iowa to see a sick relative, and I didn't expect they'd be back so soon. But they decided to drop in to Afton Station briefly to say hello on their way home. I like Roz very much and don't get to see her much, so it was a nice visit.
Betty came for a while too, and then there was the giver of the Mystery "thing", but that's another story for tomorrow.
Start guessing!
Posted by Laurel at 5:22 PM

Awesome that you made their trip so much better with the guide book :o)

That gift looks like a couple of toy rubber snakes with hair berrets.
But, what it's supposed to actually BE, I don't know.

Exploring Route 66 without a map or anything! That's REALLY getting in touch with one's inner Christopher Columbus!