What a difference a day makes

For most of Route 66 between Tulsa and Afton, the railroad tracks parallel the road. I've been wanting to snap a picture of a train as it rolled past, but you can imagine how hard it is to photograph a moving train when you're driving. Today, I tried. Here's the result. I'm just sorry that there's no passenger service around here. We have lots of trains, but they're all freight. Afton was once a passenger railroad hub. I'll try again for better pictures. Of course, it's not the same without the rumble of wheels on the track. 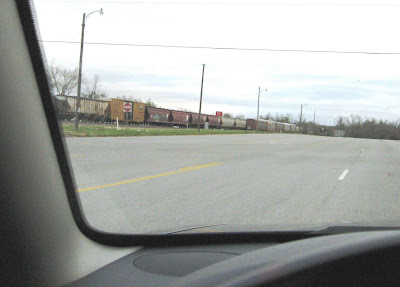 I went to a party last night and may have had a touch too much wine, my basketball brackets have bottomed out, the weather has turned from warm and sunny to gloomy skies and temperatures falling by the minute, and to top it all off, I've been at Afton Station for two hours without a single visitor. It's feast or famine around here. Maybe I'm just being impatient. After all, church probably hasn't even let out yet. I'm spending my free time (instead of cleaning, which is what I should be doing) dabbling with writing a short story based on the flapping screen across the road which, on this windy day, looks like it's going to break free and fly over here and break my gas pump. My fiction writing skills seem to have deteriorated as fast as that building across the street in the last few years. (Hmm... not a bad metaphor for my story. LOL). 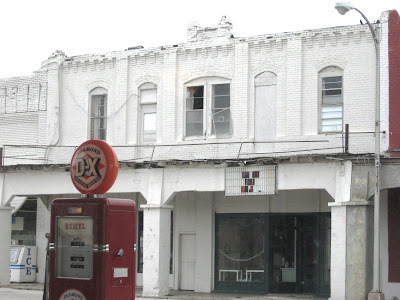 I thought Tattoo Man Ron was coming today, but he hasn't shown up. Lucky for him, since it doesn't take two of us to have a boring day.

Last night I went to a fantastic party to celebrate the life of a friend who passed away several months ago. One of his last wishes was to have his friends throw a big bash and enjoy themselves in his honor. His life partner gave a toast that included a quote from his favorite author, Alice B. Toklas, which talked about the value of parties. The crowd seemed to be doing a good job of enjoying, but I regrettfully had to leave early in order to get up this morning to come to Afton.

At last! Five visitors all at once! Two folks from Kansas, then a couple from Sweden with their young nephew who is an exchange student in Ohio, and had not a trace of a Swedish accent. Between these two sets of visitors, they bought over $150 in books and merchandise. I'm not complaining any more!

A German couple and their 3 1/2-year-old son came next. I was amazed by how much little Paul looked like David's son Patrick. Paul was all decked out as a German-speaking cowboy today. 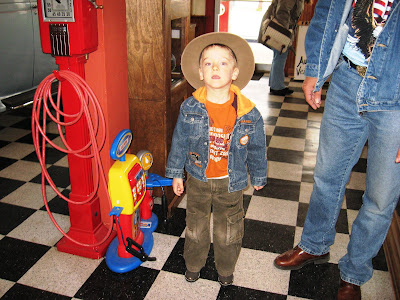 Later in the day, we had four visitors from Grove, OK and three from Arkansas, bringing the grand total to 15 today. The final folks were friends of David, and David arrived soon after to give them a personal tour of the cars. Here are a few pretty girls taking a ride in the car. David's son is peeking out to the right . The day turned out to be pretty darn good after all! 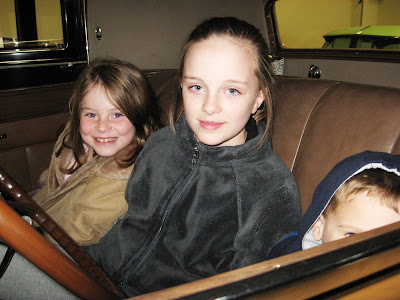 Hey, it ended up being a good day! Lots of interesting visitors!

I've always said that I want people to throw a kickass party for me when I'm gone. I think it's cool that your friend felt the same way, and that you were all able to have that party in his honor.

One of the things that Cousin Shane taught me about ferreting out Route 66 (I think that most states have gotten better about marking it now) is to pay attention to the railroad tracks, as the old road often parallels the tracks. Also the old electric lines...and to watch for pavement that has been added to on the sides, to widen the road. It's a lot of fun to try to put all the clues together!

Perhaps someday I can bring my wife to visit you. Then, you'll be able to say you've had a visitor from Malaysia, too.