I didn't have a second yesterday to breathe, much less blog. Today isn't much different, but I'm determined. So, just pretend you're reading this yesterday. :-)
________________
It was a bleak day at Afton Station today, with no sun, the usual abundance of wind, and looming thunderstorms. I had eight visitors, most of them in the afternoon. My visitors hailed from Mississippi, Wisconsin (again!), and Oklahoma. At about 1 p.m. I had a phone call from Dean "Crazy Legs" Walker from over in Kansas, letting me know that my friends Jim Conkle and Croc Lyle were on the way to Afton Station. Dean operates as a link in our little Route 66 jungle telegraph. He hangs out on the road until he sees people we know pass by, then calls all of us who have businesses west of him to alert us to their impending arrival. In this case, Jim and Croc didn't even see Dean as they passed through Kansas, but apparently Dean saw them!
Anyway, Jim is the mover and shaker behind the newly-forming Route 66 Alliance. He lives in California. Croc is the president of the Texas Route 66 Association. The two of them, and a few others, are attempting to revive the Route 66 Pulse, a really great newspaper which existed for several years before it folded not too long ago. Jim and Croc are, therefore, traveling across Route 66 gathering support (both moral and advertising) to resume publication. I'm all in favor of this, and intend to do my part by placing an ad. If all goes well, the first edition of the resurrected Pulse will be available in May. The Pulse is a great way to disseminate information on Route 66 "doings" across the entire length of the road. 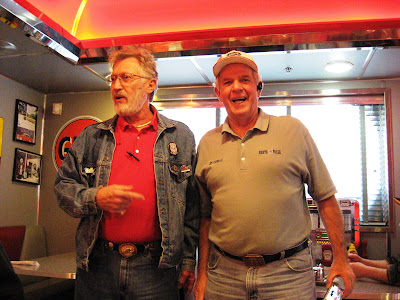 Jim (on the right) and Croc (left) could only stay at Afton Station for about a half hour, but that was OK since I already had plans to see them at dinner tonight in Tulsa.
________________
I rushed home and cleaned up to head for the 5 & Diner for dinner with as many Tulsa Route 66 people as we could rustle up. I must say, it's pretty easy to rustle up Route 66 people. We all love to be together and use any excuse to gang up. Having Jim and Croc in town was the perfect excuse! Eleven of us showed up at the retro diner, which was built here about 5 years ago and has really great food. The owner, a friend, also owns the Harley-Davidson dealership next door and has put together a wonderful little Route 66 museum on the upper level of the dealership. I donated some of the items to the museum and I'm pretty proud of that. 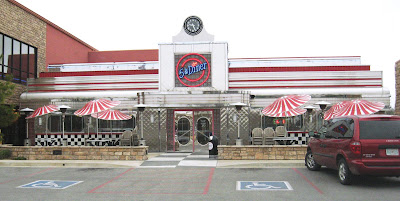 I had my usual mushroom burger, which I like because the 5 & Diner is one of the only places in town where they won't balk at cooking burgers the way I like them, i.e. almost uncooked. I like just the slightest touch of searing on the outside and the rest should be bloody raw. Many restaurants resist cooking them that way, but the 5 & Diner doesn't blink when I tell them it can even be cold in the middle. Pile some fresh sauteed mushrooms on top and....yum! 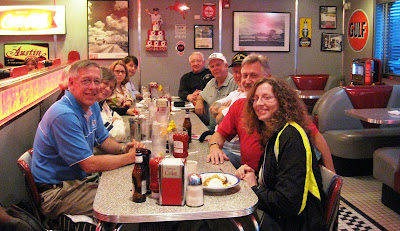 We had a great time, and lots of Route 66 talk was talked. There were several announcements made which I'll mention in another posting. Lots of ideas were tossed around. Many laughs were laughed. And I stayed up a little too late. Very nice day!

Sounds like a great day and great dinner! I read Ron's post about the Route 66 Pulse, and I think it's great that they're reviving it. I'm not familiar with the publication, but I hope that with the renewed interest in road trips and vacations that are close to home, it will do well.

I look forward to the new Pulse. I miss the old one. That's how I learned about your place, among other places I want to visit.

You like your meat the same way my Dad does. The way he likes his steaks, a veterinarian could probably revive it.