Sidewalk Highway Monument to be a reality...

. . . if we can raise the rest of the money. Today, four members of the OK Route 66 Association -- Carol Duncan, Marilyn Emde, Jeanne Miller, Cletus Simpson -- came to Afton to go with David and me to the site of the proposed monument at the western end of the 9-foot highway's Afton segment. I'm so excited about this! Here's a picture of the proposed monument, which will be engraved on Oklahoma red granite by a company in western Oklahoma which has done similar monuments for other sites on Route 66. It's about time this historic part of the Mother Road is recognized and explained. For an explanation, click to enlarge the picture below. It says it all.

The $3920 cost of the installation has been reduced by $1060 by David, my ex, offering to pick up the monument in western Oklahoma, deliver it to the site, and "plant" it in cement there. The county is going to be asked to provide a small pull-off area near the monument, and if we sweet-talk them enough, maybe a fence around it. But that still leaves $2860 we will owe the company. So far, at least $1000 of that has been donated, but we will now officially start a "$66 for 66" campaign. We will take all donations of any size, but the "66" is a catchy way of starting the campaign. We would like to get the full amount as soon as possible.
If anyone is interested in donating to this cause, please send checks to:
Oklahoma Route 66 Association
P.O. Box 446
Chandler, OK 74834
Ok, enough begging.... It was a good day at Afton Station today. I put down the new rug, which looked so small in that big room! Betty stopped by and stayed for quite a while, and that's always a happy time for me. Other visitors included a trucker from St. Louis (his second visit there), two folks from Minnesota, and two guys from Michigan. Then, of course, the four Association folks arrived and looked around a bit before we drove out to the 9-foot road.
Here are Carol, David, Marilyn, and Jeanne.... in the rain.... at the monument site. It's a bad picture because it was taken on the fly. Nobody wanted to hang around for pictures in the cold rain! 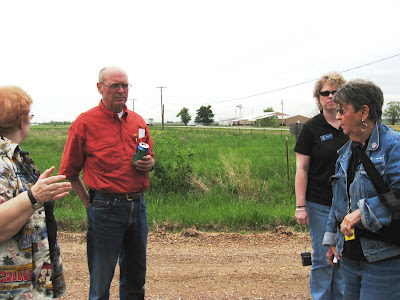 And here's the rug in it's new home. It's already been christened by being stepped on frequently today. 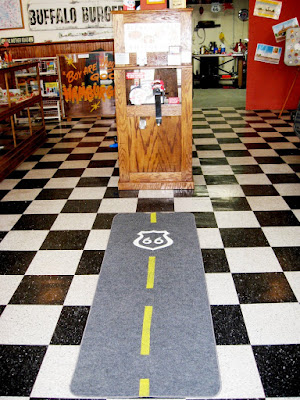 I hope things move forward with the monument! And the rug looks great. Glad it was a good day, even if it was a little rainy. (Here, too!)

The same day I uninstalled IE8 because it wasn't displaying pages correctly Zone Alarm Firewall popped up an alert stateing IE was trying to access the internet - after I uninstalled it. I hit the deny button, but needless to say, I'm a little confused here. I'm running Windows XP SP3 on an HP Pavilion d4100e with Avira & ZA anti-virus suites & Windows Defender (they all seem to get along OK) & I run daily anti-virus scans. I uninstalled IE8 using "Add/Remove Windows Components" in the "Add/Remove Programs" feature of Control Panel. Does anyone out there have a clue? I'm posting this before trying my own Google search. [url=http://gordoarsnaui.com]santoramaa[/url]