First of all, a quick picture of Side Two of the Meadow Gold sign. They're moving right along. They don't seem to be working today, but we're having intermittent rain so I'll forgive them. :-) 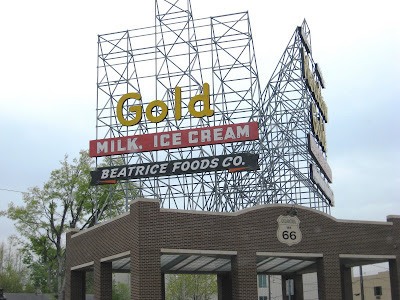 Now about yesterday..... Wow, what a day! I haven't had a day at Afton Station pass so quickly in a long time. And it was a whole lot of fun, too. We only had 9 visitors in total, but they were all the kind of people with whom I like to spend lots of time.

Ron M. was with me yesterday. We had drop-in visitors from Washington State, Great Britain, and California. But we were also awaiting visits from folks we were expecting. Shortly after we opened, one anticipated guest arrived on his motorcycle. He's Larry Banks from Springfield, MO. Last month, my friend Mike Ward and I devised a Route 66 Trivia Contest for members of the Route 66 Yahoo eGroup http://groups.yahoo.com/group/route66/ which, frankly, we both thought would be too difficult for most people. We had five or six entrants, but the big winner was Larry, who answered all but two questions. He drove down to Afton yesterday to claim his prize (a book). He revealed that he happened to have three days off from work during the time we posted the contest, and he spent most of all three days doing research. Nice job, Larry! That's what I call persistence! Larry stayed for almost two hours, and there was no lack of Route 66 chatter with this true Roadie. 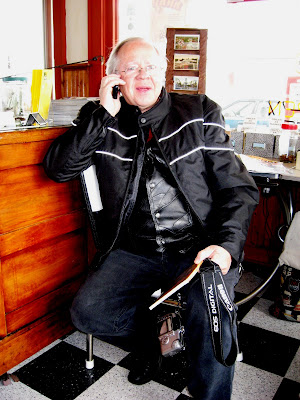 Then David, my crazy ex, arrived to put a few "finishing touches" on the Citroen 2CV he's been restoring. By finishing touches, he meant that he felt he had enough of it stuck together to take it for a maiden voyage. As you can see, it's far from what most people would call finished. Nevertheless he took the seatless, windowless, doorless, hoodless, fenderless hulk out for a spin around Afton, and bragged that he got it up to 80 KPH. That's kilometers..... not miles... thank goodness. It was a little unsettling. However, he didn't fall out, nor did he get arrested for any of the two dozen laws I'm sure he was breaking. Sometimes it's nice to know that Afton doesn't have much in the way of law enforcement..... sometimes. 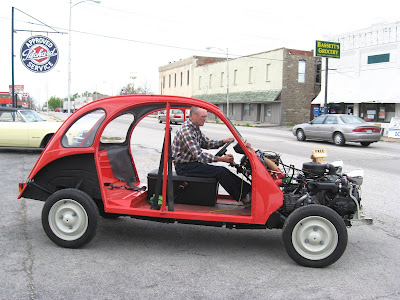 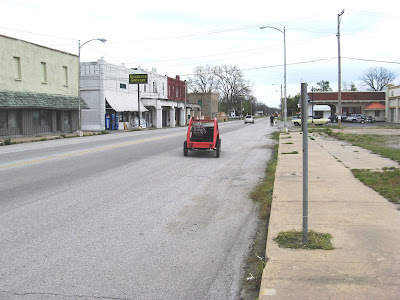 Our next guest of honor was Mary Graham, Ron's next door neighbor and a friend of mine, too. She was also taking a "maiden voyage".... her first solo car trip. She was headed for Kansas, but her first stop was Afton Station. Mary is always a lot of fun, besides being a tremendous cook who is always willing to share her goodies. She brought us some yummy muffins, almost hot out of the oven. Betty came in shortly after Mary arrived, and -- wouldn't you know it -- they had a very good friend in common! The friend is now deceased, but Betty and Mary had a lot of good memories of her to share. Here they are... sharing. 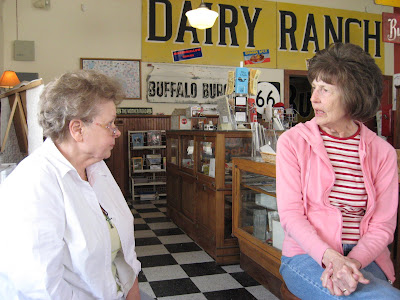 As we were getting ready to head for home, we had a visit from Bob Gehl of the Route 66 Association of Missouri. http://www.missouri66.org/ He lives in St. Louis but was in Oklahoma on business so he stopped in. We had a great visit with him, too. He's a fellow postcard collector, so of course those had to be discussed at length.

We finally got on the road to home, but almost an hour late. That's just fine.... it was definitely worth it. Have I told you lately how pleased I am with everything that's happening at Afton Station so far this spring?

What a great day! I predict very good things for you and Afton Station this summer....

I cracked up over the "invisible Citroen." :)

David is a lunatic, but it's a good kind of lunacy. I wish I'd been there to see him cruising around town in that Citroen.