It was cold. It was dreary. It was almost devoid of visitors. What a change from yesterday. Ron was with me, and Betty stopped in for a while, but otherwise we only had four visitors today at Afton Station, two from Columbus, OH and two from Grove, OK. Both couples were very interested in everything at the museum, so those were the bright spots of the day.
By 2:30 p.m. we were bored and I had contracted a chill I just couldn't shake, so we headed for home. On a tip from Betty, on the way out of town we located the former Acme Motel, or what's left of it. You can't see it in the picture, but "Acme" is very faintly visible on the sign. All that's left of the motel is one possible unit to which it appears someone has attached a later building of some sort. You will see the Acme in it's better days when we finally get the before-and-after slide show put together. 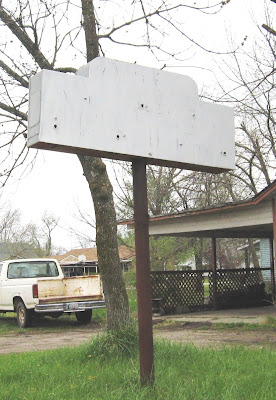 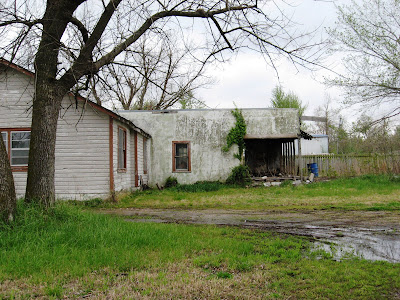 The Palmer Hotel building across the street from Afton Station has been for sale for years, but the contact phone number had faded out on the "For Sale" sign a long, long time ago. It was great to see today that it has been rewritten on the sign. I think it will be a whole lot easier to sell if a potential buyer knows how to reach the seller, don'cha think? :-) I just want this building sold to someone who will care for it, restore it, and appreciate it's history and beauty. If anyone is interested, call 918-961-0122. I'm not sure who will answer. 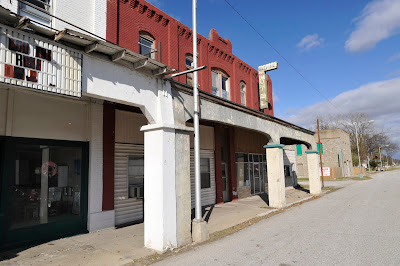 Oo, I love the Acme Motel sign! I would love to have that in our yard! Is the building abandoned or occupied?

We've got the gloomy stuff going on here, too, but by the end of the week...80°! Woohoo! I should be over this stupid cold by then, and I'll get the covers off of our patio furniture and get it ready for some relaxing!