Eat your heart out, Rich Henry!

Rich Henry is a terriffic guy who owns and operates Henry's Rabbit Ranch on Route 66 in Staunton, Illinois. He has a great gift shop, an interesting building and property, and dozens of bunnies! The queen bunny, Montana, passed away last year, but Rich is training another of his crew to take her place as official receiver of visitors. They are great ambassadors of the Mother Road. Anyway..... today Afton Station took on the rabbit theme in honor of Easter weekend. Here are a couple of our bunnies. 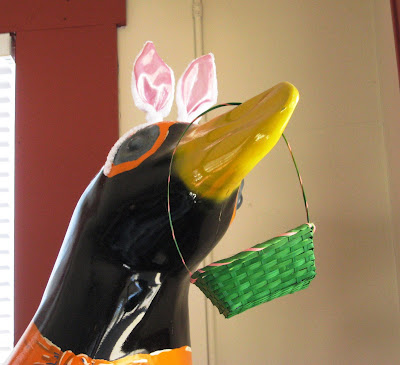 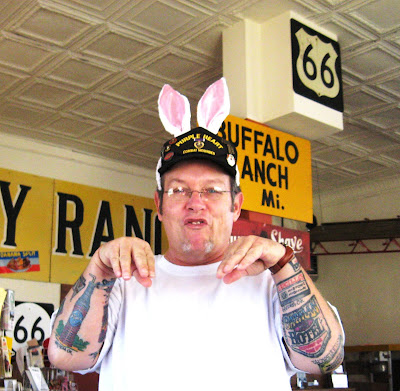 Both Tattoo Man and Tripper were embarrassed about posing for these pictures, and made me promise I wouldn't publish them. I guess this proves I just can't be trusted. LOL!

The morning started out slowly, but picked up later. The day was gloriously sunny, a perfect traveling day. Lots of cars and motorcycles drove past, but we only had 13 visitors in total. One group was a mini van that unloaded 8 adults, a la a clown car at the circus. Turned out it was a big family -- mother and father, three adult daughters and their husbands. The parents live in Afton and their kids had come to visit them from North Dakota and Minnesota. We also hosted a father and his young son from Dewey, OK and a very sweet lady from Vinita, OK.

We were closing up when Karen and David Baker arrived. He was sporting a University of Kentucky shirt, so I was delighted to reopen and invite them in. I've never met them before, but I think they were the first folks from my alma mater to darken the door of Afton Station, and I was thrilled!!! They live in Springfield, MO now, but we had some good exchange of college memories before they left. 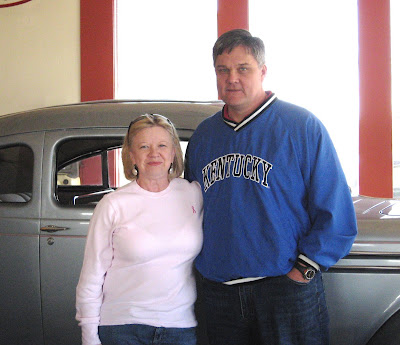 After the Bakers left, we closed up and headed for home. We left 45 minutes late, so I hopped (to continue the rabbit theme) on the turnpike and floored it. Tomorrow we're supposed to have rain all day. That, combined with the fact that it's a holiday, will probably mean very few visitors, but I plan to go to Afton Station anyway. I really don't have anything else to do.

Have a pleasant Easter at Afton, even if it IS slow!

I've met Rich, when Shane and I took our little trip. He was just the nicest, friendliest guy you'd ever hope to meet, and talked to us at length, took our picture, etc. Just a gem of a guy.