Even after doing my grocery shopping in Tulsa at 6 a.m., taking the groceries home and putting them away, and driving to Vinita for breakfast of eggs and a biscuit, I still had almost an hour to kill before needing to be at Afton Station. So, I drove around some back roads in Vinita. I saw this photogenic rock building and stopped to take a picture. 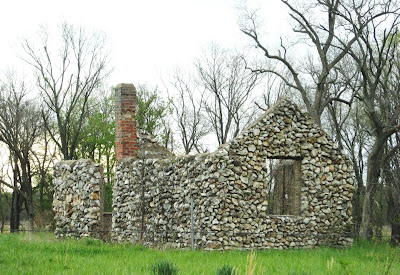 Also, there's a small road that takes you down behind the "World's Largest McDonald's" which is on the turnpike, without having to get on the turnpike. Actually, it's no longer the "World's Largest", the title having been usurped by China or Russia or someplace (not sure... I don't keep up on McDonald's lore, but you can probably look it up). At any rate, it's the "World's Only Drive-Under McDonalds", since the turnpike passes under it. The picture I took from the side road isn't good, so I endangered life and limb on the way home tonight by getting on the turnpike and taking a pic of it while driving under it at 75 mph. Neither picture turned out to be worth the trouble, in my opinion. The McDonald's used to be the Glass House Restaurant, a fancier place where it's said that high schools used to hold their proms, looking down at the romantic headlights from passing trucks, I guess. Whatever. 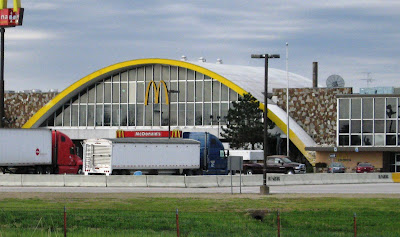 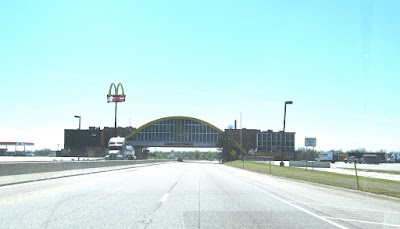 Once at Afton Station, the day moved quickly. David was there even before I arrived, working on the 2CV. He stayed all day. Betty came and brought me a treasure -- some more pictures of the tamed buffalo that used to perform with his trainer, Larue Olson , at Buffalo Ranch. These pictures are a treasure because they're from Betty's personal collection. As you might recall, the trainer was eventually accidentally killed by the buffalo. From looking at these pictures, I can certainly see the danger! 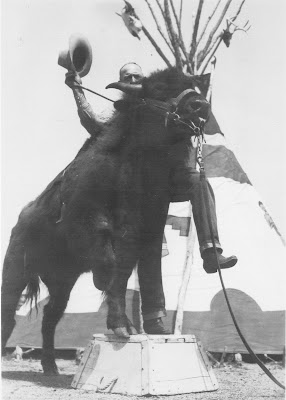 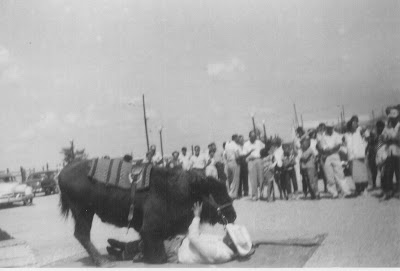 My 12 visitors today included folks from New Orleans, a trucker from Missouri, guys from Bartlesville and Miami, OK, and two young Mormon missionaries. The missionaries were really nice guys who stayed for about a half hour while I pelted them with questions about what it must be like being so young and landing far from their homes (in their case, Nevada and Wisconsin) in a little town like Afton. The LDS religion has always fascinated me.... not the dogma, but the lifestyle.
On the way home, I noted that the Meadow Gold sign seems to be done, and then got an invitation in today's email to it's Dedication on May 22. Exciting! I took this picture, but it's impossible to photograph both sides at once. But hey, they're identical anyway! 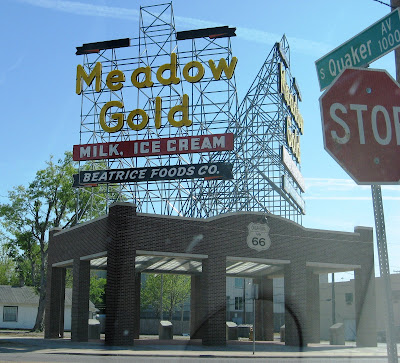 I have a "before" picture too, but since I think there are probably already too many pics in this entry, I'll save it (along with some others) for tomorrow.
Posted by Laurel at 5:52 PM