This was by far the busiest day at Afton Station EVER. Although David, his wife Sylvie, and a committee sent ahead by the Vintage Car Rally Assoc. did most of the leg work with putting the luncheon together, I'm tired just from talking, talking, talking. There were, by their own count, approximately 100 folks in the rally in about 48 cars. They arrived right on the dot of 11:30... and virtually all at once. But the remarkable thing about the day was that we had tons of non-rally visitors, too. I stopped counting at 30 and there were at least 10 more after that. I'm pretty sure we had at least 150 people at the Station at once, which is a new record. 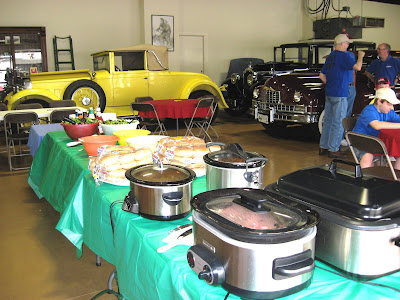 Betty, her sister Marlene, and Marly came to lend a hand, too. That was good, because I was kept very busy on my side of the Station, just selling things, talking about Route 66, and showing people where the line for the bathroom formed. :-) I really never got over to the car side to get any lunch, but Betty brought me a piece of brisket and a piece of cake. And then there were Marly's donuts.... oh, yum! 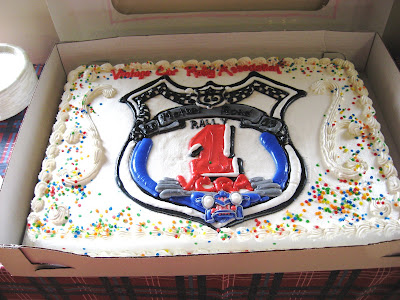 Marly put a ladder up on Bassett's building across the street and climbed it to take these pictures of the cars. My little camera didn't have a good enough wide-angle lens, so he took them in two separate pictures. There were some cars on the side roads too, so they didn't all get in these pictures. 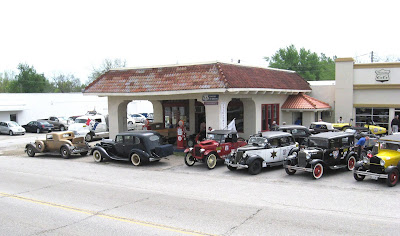 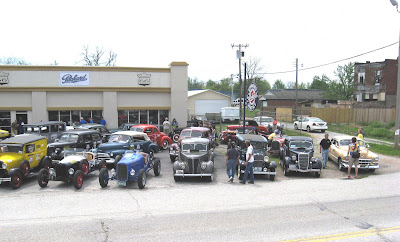 Tomorrow I'll have time to look over my guest book to see from what states the racers originated. It was definitely a national event, with cars from Boston,NYC, California, the Carolinas, among many others. A most interesting group with some extremely nifty cars.

Jacson, my new Brasilian friend, came back today and stayed all day. He told me he took over 300 photos of the cars, and he's going to make a CD for me. After that, I'll be able to post more photos of rally cars. He took this one with my camera, and I love it although it was such a gloomy day that many of the shots taken today are very dark. 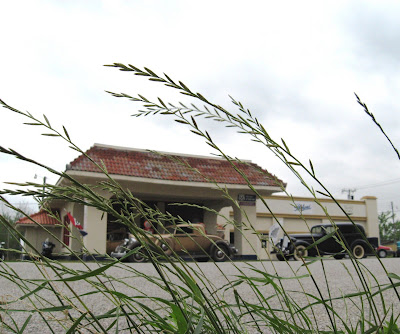 Today was tons of fun, but I'm looking forward to a less frantic day tomorrow. I'm pretty sure this was the most exciting day in Afton Oklahoma in a LONG time! I'm going to rest now. See you in Afton tomorrow!
Posted by Laurel at 5:35 PM

Awesome to have som many visitors, they are saying that folks are going to stay closer to home this year, sounds like it could be a boon for you :o)

That's incredible, and such good news! I think Ken is right, with people vacationing closer to home, this might be a banner year for Afton Station. There's always a silver lining!