I've been saving this for a while, but I have a few moments this afternoon, so here goes. I had a little time the other day at Afton Station to read some reprints of "breaking news" items from the Inola Register of 1908- 1911. Inola was (and is) a small town about 15 miles south of Claremore. I'm going to copy several articles here because they speak to me of some vast differences between "now" and "then". I wasn't around in 1908 and I'm sure none of you were either, but judging from these articles, the way both law enforcement and the press treated crime and criminals was remarkaby different from present day tactics. Would that crimes were so benign now, and that the reporting of them by the press was so gentle now. Also, these brought a smile to my face, and I think you'll feel the same.

Sheriff Stephens' Raid
Inola Register July 31, 1908
On last Friday night, Sheriff Hiram Stephens and his deputies made a raid here hunting boozs [sic], crap and poker games, but found only a little private stuff. On Saturday afternoon the Sherif, Judge Bonds, and County Attorney came down from Claremore on the local and the Sheriff pounced upon a crap game and got six of the boys. The boys were all young, and we withold their names, hoping that this little experience may prove a valuable lesson to them. One of the boys gave the sheriff quite a chase, but after procuring a horse the sheriff succeeded in stopping him in Geo. Duffield's cotton patch, about a quarter of a mile north of town, but not until the sheriff had taken a shot at him. The chase was taken good naturedly by both the sheriff and the other fellow and they came back to town laughing about it. The sheriff, knowing the other fellow was tired after such a lively chase, let the other fellow ride his horse into town and he walked. By the time they arrived Judge Bonds and Prosecutor Hall had court organized ready for business and the boys were taken before the judge who fined them $25 each and cost, making a total of $27.50 each, making a total of $165 for the six, a pretty expensive crap game, but cheap in the long run if the boys will only take a lesson from this experience and quit the business. 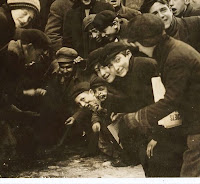 Sheriff Charged
Inola Register July 7, 1911
Sheriff W. E. Sander swooped down on Inola last Saturday and searched Al Gardner's place and found 12 bottles of Puritan, which he destroyed. Al says he immediately charged the sheriff $3 for the 12 bottles, which he said was his cash price for the goods. Puritan is a substitute for beer, alleged [sic] contain a very small percentage of alcohol. Al had 8 barrels of Puritan at the depot but happened to have only 12 bottles in his place of business when raided. Al is a lucky cuss anyhow. If it had been the editor of this paper we would have the whole of it, the 8 barrels handy, and would have lost it all. Sheriff Sanders is putting forth every effort to enforce the law. He left instructions with his deputy, J.M. Coker to destroy anything in that line he might find in a man's place of business.
______________________

I have a few more of these which I'll copy on another day. Love that Inola Register!

Hilarious! "Al is a lucky cuss anyhow." Haha! Was that when Prohibition was a scourge upon the land, or was it a dry county?

Would you mind photocopying some of those articles for me to use in the classroom? I have an awesome lesson in mind that will tie in SO well with our magnet curriculum....