More from the Inola Register

Explosion is Heard All Over Town
Inola Register Oct. 29, 1908
On last Friday night Ross & Morris' store was entered and the safe was blown open. The charge was a heavy one, blowing the safe over, and blowing the door back against their writing desk, damaging it considerably. Other things in the store were damaged by the explosion.
There is no question but what the job was done by amateurs. The safe contained no money, but five or six dollars were taken from the counter money drawer. The explosion was heard all over town, and Oscar Jeffers, who lives just across the street, got up and went out on the front porch and took a few shots at them. The shots were promptly returned, one passing through the window into the house.
Sheriff Stephens and Deputy Mayberry came down next day with their bloodhounds and the town joined in the search. Some arrests followed. County Attorney Hall and Sheriff Stephens came down again Monday and made further investigations. As a result, arrests were made. It seems a general cleaning up will follow. We have got to have it if the town ever amounts to anything. We feel sorry for the boys, either guilty or innocent. They have had evil influences around them for years and for that reason we withold their names. They have been allowed to enter these pool halls at will, and whoever heard of any good coming out of a pool hall? Now don't all hold up your hands at once. 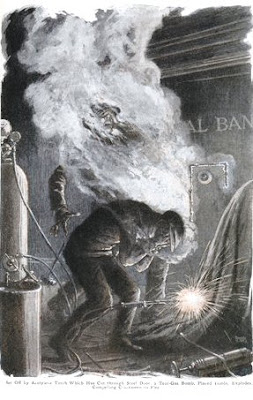 Has Runaway at His Place
Inola Register Sept. 17, 1908
James W. Moore had quite an exciting runaway at his place north of town a few days ago. Mr. Moore and his little 2-year old son were out on the farm in the buggy. Mr. Moore had occasion to stop the team. He dropped the lines and was talking to some parties and doing some writing when the team started. He grabbed at the lines, but got only one, pulling this one turned the horses suddenly, throwing Mr. Moore out The horses ran a quarter to a half mile and stopped. When Mr. Moore and the others reached the buggy the little boy had hold of the foot rest with both hands and was laughing heartily. He enjoyed all of the excitement.
Posted by Laurel at 5:08 PM

Yeah, those people that hang out at pool halls...nothin' but trouble!

it's cool to read these old stories!!

Oh, the horrors of a pool hall! Drinking, debauchery, and dastardly deeds are occurrences and traceable evils after visitations to such places. Boo to those young villains and three cheers to Sheriff Stephens, Deputy Mayberry, Oscar Jeffers, and those remarkable bloodhounds! The undisputed, wholesome reputation of Inola must be preserved and protected!

Well, you know what those pool halls did to the folks in River City. They're trouble, my friends... with a capital T,that rhymes with P, and that stands for POOL!

The trouble in River City left me with a scar on my left wrist. Seriously. (Remind me to tell you the story sometime.)

They would just be APPALLED at the places where youngsters hang out today!
But, I love hearing stories like that.